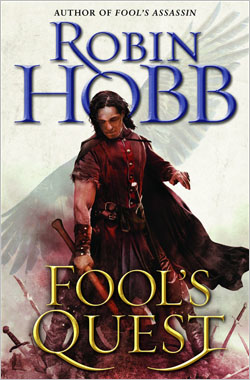 news Acclaimed fantasy author Robin Hobb has confirmed plans to release Fool’s Quest, the next novel in her extremely long-running Realm of the Elderlings saga, Fool’s Quest, in August 2015.

The Realm of the Elderlings saga commenced with the critically acclaimed Assassin’s Apprentice in 1995, which follows the exploits of a bastard son to a prince in the Farseer royal lineage of The Six Duchies in a medieval-like world. It then progressed through a total of nine books (consisting of three trilogies) finishing with Fool’s Fate in 2003. At that stage, many fans regarded the popular series as complete.

However, Hobb restarted the series in 2009 with a new series focused around dragons, but set in the same world and with ancillary characters. In the meantime, the author had also penned a series set in an unrelated world — the Soldier Son trilogy.

Since Fool’s Fate, Hobb’s successive books have not been as highly regarded as the first three trilogies in The Realm of the Elderlings saga, with some fans believing that Hobb had already contributed her finest work. The publication of Fool’s Assassin in 2014 did much to turn this view around, with Hobb returning to several of her key characters from her original series, including the main protagonist, bastard-born FitzChivalry Farseer.

In a blog post published earlier this week, Hobb revealed the cover art for Fool’s Quest, the next book in the series, and confirmed that it would be published later this year. Amazon has opened pre-orders for the book, which is currently listed as being available on August 11.

“I can’t possibly put into words just how special and wonderful it was to be reunited with Fitz and all the other old characters making appearances in Fool’s Assassin again. But that could have become a problem, as my expectations were extremely high. Fans have been eagerly awaiting this novel for about a decade, so understandably it has lofty expectations to meet. And for the most part, though the pace will likely be an issue for some readers, Fool’s Assassin delivers on all fronts.”

“As I approached the last hundred pages of the novel, I found myself getting wistful, realizing I’d only get to spend a few more hours with these characters at this point in their lives—at least until the next book comes around. Fool’s Assassin feels like a visit with an old friend, one you haven’t seen in years but who still holds very special a place in your heart. Fitz may have grown older, but he’s still exciting company.”

Opinion/analysis
I am tremendously excited about Fool’s Quest and will be reading it as soon as it comes out. I think Hobb did indeed have a few down years — most of my friends didn’t enjoy the Soldier Son trilogy as much as her Realm of the Elderlings work, and I know many haven’t read The Rain Wilds Chronicles, Hobb’s follow-up to her first nine-book epic — but I personally believe Hobb is right back on form. I’m a bit late to the party, but I’ll be publishing a review of Fool’s Assassin shortly.

If you’re a Hobb fan at all, you’re best advised to rapidly make your way through The Rain Wilds Chronicles to catch up on her world, and then pick up Fool’s Assassin immediately. You only have a short six month wait until what I believe will be another sterling work from one of fantasy’s greatest masters.