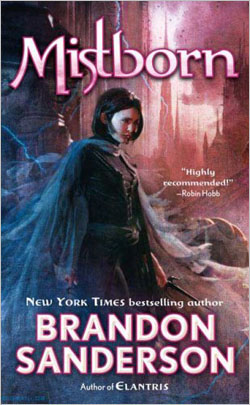 news Brandon Sanderson has revealed plans to publish two new novels in his Mistborn fantasy series, one in late 2015 and 2016, as part of a plethora of projects which the popular fantasy author has on the boil. The first, Shadows of Self, is already available for preorder and will be published in October 2015; the next, Bands of Mourning, will be published the following January.

There are currently four Mistborn novels; three in the original trilogy, and one follow-up set several centuries years after the originals. The series is regarded as one of the more successful series by a modern fantasy author. Sanderson consciously set the series in a non-Tolkienesque world, avoiding many of the stereotypes of good versus evil and of Orc-like creatures, elves and so that represent popular fantasy tropes.

Writes Sanderson on his blog in mid-December:

“The last half of the year was dedicated to Shadows of Self, the new Mistborn novel. And I have a confession to make. I also wrote the sequel.

Now, before you start wagging your finger at me for being a robot, there was a really good reason I did what I did. You see, I was having real trouble getting back into Shadows of Self. I had written the first third of it in 2012 between revisions of A Memory of Light. (I was feeling Wheel of Time overload.) However, it can be very hard for me to get back into a book or series after a long time away from it. (This is another issue with the Rithmatist sequel.)

So, jumping into Shadows of Self was slow going, and I found it much easier to go write the sequel to refresh myself on the world and characters. That done, I was able to move back to Shadows of Self and finish it up.”

Both books will feature the ‘Wax’ and ‘Wayne’ characters from The Alloy of Law, which entered the Mistborn universe some 300 years after the conclusion of the first trilogy.

In his blog post, Sanderson also noted a number of other projects he’s working on, ranging from the next book in the epic series The Stormlight Archive, as well as sequels to Elantris, Warbreaker and more. He is also planning to eventually publish another ‘Wax and Wayne’ Mistborn novel, entitled The Lost Metal.

On the other hand (and this is my dominant view at the moment), I largely regard the Mistborn sequence as complete at this point. I didn’t enjoy the Alloy of Law to the same extent as the original trilogy, regarding it as a much lighter and less in-depth look at a Mistborn world whose secrets we have already discovered.

Then too, I would much rather Sanderson be spending his time writing what will surely be regarded as his masterwork series — The Stormlight Archive. Larger, grander and more complex than Mistborn in every respect, it’s the Stormlight Archive that I would guess most readers are interested in now. Sanderson is two books into a ten book series. Shouldn’t he be expending his creative efforts in that direction, rather than more light Mistborn follow-ups? I didn’t enjoy Words of Radiance as much as the first book in the series, The Way of Kings, and I feel Sanderson still has much work to do to prove that The Stormlight Archive can be another series as grand as The Wheel of Time or A Song of Ice and Fire.

Having said all this, of course I’ll delve into Sanderson’s new Mistborn books. It’s Brandon Sanderson, after all — a certain level of quality is very much assured ;) Even Sanderson’s side efforts are top-class.