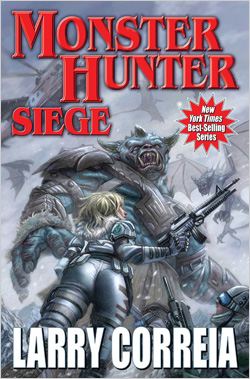 review More of the same: Monster Hunter Siege is a largely satisfying new entry in Larry Correia’s popular Monster Hunter series of urban fantasy novels, although it strongly demonstrates Correia’s unwillingness to take risks at this stage of his writing career.

If you are the type of reader who admires gutsy, humorous, urban fantasy with lots of guns and explosions, you would have had to have been living under a rock for the past decade to have missed Larry Correia’s Monster Hunter series.

The books – starting with the bombastic Monster Hunter International – are a highly enjoyable, rollicking read set in our current society, but with the addition of every type of fantasy monster you can imagine – and a bunch of ruthless mercenaries determined to keep society safe from them – as long as it’s at the right price.

Correia’s drawn from strong material for the series. His heroes have well-defined character traits based in the ‘capable man faced by insurmountable odds’ approach and are supported by a cast which the author uses to provide comic relief in between the explosions and epic sword, knife and martial arts fights which fill his pages.

Then too, the series has been getting deeper as it has progressed. Correia has gradually introduced a larger context for his monster hunters that makes it clear he is setting the stage for an end of series epic showdown between the forces of good – and their champions – and the forces of evil and theirs.

I have found reading the Monster Hunter series akin to biting into a delicious hamburger. It’s not the most amazing meal you’ll ever eat – but it’s the sort of meal you’re happy to eat most days.

Monster Hunter Siege continues this tradition, with a somewhat new bad guy and a new location – the wilds of Russia – which the same characters battle.

Correia uses Monster Hunter Siege to advance both some of the plot he has been building in the Monster Hunter series, in addition to lightly developing some of his characters. Overall, if you’ve been reading up until now, you’ll largely know what to expect. You’re going to get plenty of battles with evil creatures, lots of details about guns and other weapons, and a solid slice of humour along the way.

Any Correia fan is going to enjoy this one, and I recommend picking it up if you are one.

Having said that, there are definitely flaws with the book.

For starters, as others have pointed out … there actually isn’t much ‘siege’ involved in a book with ‘Siege’ in its title. Correia gathers much of the Earth’s total cadre of monster hunters and gathers them in one location. But then the narrative view essentially departs that scene, leaving the reader with little insight into what happened while they were elsewhere.

Characters such as Owen Pitt get a decent dollop of character development and backstory, but the rest of the Monster Hunter heroes are essentially ignored. At this stage, several have descended into the realm of cardboard cut-outs. It’s a shame to see Correia largely abandon Pitt’s supporting monster hunters in favour of focusing almost solely on the series’ protagonist.

The prose in Monster Hunter Siege can also feel lifeless at times – as if it was written too fast, without enough passion and care.

Correia’s got several major book series on the go at the moment – and what I usually see when authors spread their efforts like this is that the energy in each individual book goes a bit flat. We’ve seen this issue with Brandon Sanderson before, and now we’re seeing it with Correia. I don’t blame the author for wanting to pursue all of his ideas, but I also know that I’d rather have one GREAT book from him per year, rather than a couple of ones that left me feeling a bit flat.

I felt this way about Correia’s new fantasy novel, Son of the Black Sword, as well.

Correia also feel into the trap of setting up an omniscient, ultimate evil bad guy in Siege. While I get that it’s a standard fantasy trope, I didn’t really gel with the idea of the author introducing yet another malignant chaos god-type character into his series.

Ultimate evil characters are better when they have more personal motivation than simply wanting to destroy everything because of their nature as a chaotic force. Correia knows this – his most compelling bad guys have been quite human, even as they exhibited omniscient traits. And yet, in Siege he fell into the trap of failing to provide enough character and motivation for his ultimate evil. This was probably the most dissatisfying aspect of the book, in my view.

What all of this speaks to is that Correia is probably not taking enough risks in this stage of his writing career.

While I enjoy the Monster Hunter series, it cannot continue forever, and Correia cannot keep on throwing up the same approach in it forever.

For the next entry in the series, I want to see the author get out of his box a bit. I want to see bad guys with real personality again. I want to feel real pain and real joy from the main characters. I want deeper character development, a plotline that involves more than just blowing up things, and I want real consequences for things that happen in the series.

In short, I want Larry Correia to step it up a notch.

I know that the author has it in him.

There is no doubt that fans of the series will keep on buying Monster Hunter books probably as long as Correia keeps writing them. You only need to look at how many books along the same lines that Raymond E. Feist has generated, and how many people keep on reading them. This is a recipe for financial success.

However, at their best, fantasy novels are more than just pure entertainment. Their ability to endure over the long-term is also based on their ability to go further and deeper. Does Correia want to do this? I don’t know. But I know that as a reader, I want the authors I love to continually push their own boundaries.

Larry Correia is already one of the best fantasy authors to have leapt onto the world stage in the past several decades. But to become an all-time great, he needs to keep on challenging himself to climb higher and take more risks with his work, to gain more rewards. Just as Owen Zastava Pitt does.