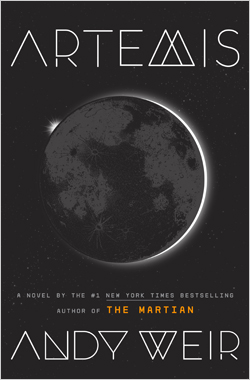 news Andy Weir, author of the science fiction novel The Martian, has released the first chapter of his upcoming second book, named Artemis.

The Martian catapulted Weir onto the global stage. Initially self-published in 2011, it was eventually re-released commercially in 2014. The book chronicles the struggles of an American astronaut, Mark Watney, as he is acccidentally abandoned on Mars during humanity’s early exploration of the planet.

Weir noted on Facebook late last week that he had published the first chapter of his next book online.

Artemis features a very different setting than The Martian. It is also set in the future, but this time on the Moon. Humanity has established a small city on the lunar surface, named Artemis. Some 2,000 people live in the city, and it is a popular tourist destination for the wealthy.

Not everyone in Artemis is there for a holiday, however. The protagonist of Artemis, one Jazz Bashara, is relatively poor compared with the tourists who pay top dollar to visit Earth’s largest satellite. The first chapter of Artemis introduces the reader to Bashara’s struggles to make ends meet in this most unlikely of poverty-stricken locales.

The book’s Amazon description notes that Bashara will get the chance to “commit the perfect” crime. At this stage, Weir isn’t giving away too much about what that will involve.

The early release of the first chapter of Artemis gives readers a chance to get a window into the book quite a way ahead of its release. Artemis is currently slated for release in November this year.

opinion/analysis
I absolutely loved The Martian. The book was a page-turner from start to finish. I read it in a couple of nights and couldn’t put it down. It’s an absolute classic of science fiction, with all the thrills, spills and hard science that you could want from a vision of the near future. And what’s even better is that the book has helped to ignite the public’s imagination about space travel at a time when human exploration of the Red Planet is absolutely becoming a near-term possibility.

I have always been curious to know how Weir would handle his second book.

It’s not that the author is short of ideas — if anything, he seems as though he has plenty to write about. The exploration and possible colonisation of Earth’s celestial neighbours offers an imaginative author like Weir a great deal of potential subject matter. In addition, his sparse and immediate writing style — which so enthralled readers of The Martian — is ideally suited to this sub-genre.

However, Weir’s vision for The Martian was so crystal clear, and the timing for the book was so ideal, that I suspected he would have trouble replicating this style of vision and this confluence of timing for a new work. This would be particularly an issue if Weir chose — as I believed he would — to turn to a completely different story for his second book, rather than extending the plot of The Martian.

Yet reading the first chapter of Artemis gives me confidence that Weir will not disappoint fans with his second novel. Already, just one chapter in, I feel myself ready to fall back into a world that he has created again — a world with all the potential, but also the real, hard-edged daily danger — that space travel offers humanity. I’ll be buying Artemis when it comes out — and I suspect many other readers will be too.