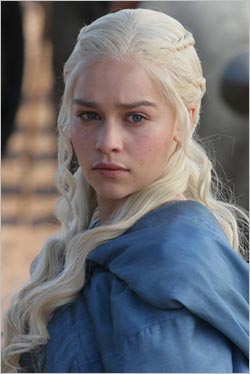 news The publisher of George R. R. Martin’s popular series A Song of Ice and Fire has reportedly confirmed the next book in the series — entitled The Winds of Winter — will not hit shelves in 2015, in news that will disappoint fans of the extremely long-running series.

A Song of Ice and Fire is regarded as one of the greatest epic fantasy series of all time, sitting alongside J. R. R. Tolkien’s The Lord of the Rings and Robert Jordan’s The Wheel of Time in its epic scope. The gritty series’ popularity has recently hit sky high heights due to the HBO television adaptation, Game of Thrones, which will be aired in its fifth season this year.

A Song of Ice and Fire has been developing since 1991, when the first book, A Game of Thrones, was first published. Since that point, Martin has published a new book at odd intervals. The latest book, A Dance with Dragons, for instance, was published in 2011 — half a decade after the previous book, A Feast for Crows. The series is slated to be completed with the book after The Winds of Winter — A Dream of Spring.

In an interview with The Guardian (we recommend you click here for the full story), Martin’s publisher at HarperCollins, Jane Johnson, noted that there were no plans for The Winds of Winter to land this year. The site writes:

“I have no information on likely delivery,” she said. “These are increasingly complex books and require immense amounts of concentration to write. Fans really ought to appreciate that the length of these monsters is equivalent to two or three novels by other writers.”

This year will see a new Martin book made available to readers, however — a collection of three prequel novellas to A Song of Ice and Fire, dubbed A Knight of the Seven Kingdoms.

opinion/analysis
No real surprise here. The Winds of Winter is expected to be one of the densest and toughest books for Martin to write, given that it will deal with an immense amount of conflict and bring many of the events in the series of a head. I, and many other readers, I have no doubt, am particularly looking forward to the full realisation of some of the magic arcs in the series — particularly involving Daenerys Targaryen’s dragons and the mysterious and icy Others.

But all this will take time for Martin to work through. His prose didn’t lose any of its magic in A Dance with Dragons, despite the author having been working on A Song of Ice and Fire for more than two decades now. In order to maintain that quality, Martin needs time and space in which to produce his best. Those of us who have been reading A Song of Ice and Fire for many years have gotten used to this — and I advise new fans to get used to it as well :)

Martin’s not in any danger of popping off this mortal coil any time soon. He’s a master writing at the top of his game. A Dance with Dragons was superb. Let’s give him the time and space he needs to complete his epic masterpiece.