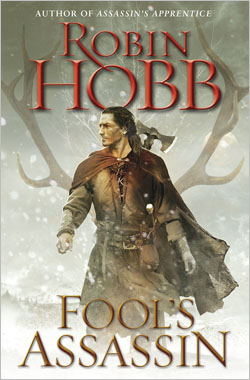 review Fool’s Assassin is a triumphant return to the world and the characters which Robin Hobb commenced two decades ago with Assassins Apprentice. Those readers who turned away from Hobb during a tough few years following her initial nine-book masterpiece are well-advised to return to the fold. One of fantasy’s greatest masters is producing some of her best ever work.

Note: This review may contain spoilers for Robin Hobb’s epic fantasy series The Realm of the Elderlings. If you haven’t read that series, you shouldn’t be reading Fool’s Assassin or this review.

When we last left Robin Hobb’s two greatest characters, FitzChivalry Farseer and the Fool, you could be excused for thinking that their story was over. Over the span of six very large novels, Robin Hobb had explored most of the nooks and crannies of her creations’ souls, and put them through virtually every challenge that life in a quasi-medieval fantasy novel could throw up. Truly, most people thought it was time for pair to earn a well-deserved rest.

Then too, Hobb’s work since she published the first nine novels in The Realm of the Elderlings saga has not always been viewed as stellar. Many fans were put off by the torturous twists and turns in the Soldier Son Trilogy, and the Rain Wilds Chronicles — although it did continue The Realm of the Elderlings saga — seemed to drag on at times, as though a framework was being tortured far beyond its original shape.

I think many fans had felt that Hobb had delivered her masterwork; the true fans (myself included) would always remain loyal to the author and continue, in a diehard fashion, to consume everything she wrote. But others did leave the fold.

I’m not quite sure what happened. Maybe Hobb was always most comfortable writing about Fitz and the Fool (but then how to explain the stellar Liveship Traders trilogy?). Maybe Hobb had just gotten tired of their story, after six long novels featuring them. Perhaps Hobb just needed to take a break from writing again, to recharge those crucial creative juices.

But something did happen.

With the publication of Fool’s Assassin in 2014, Hobb has done what I think many readers had viewed as impossible: Completely rekindled our interest in these well-worn characters and delivered a highly worthy continuation of The Realm of the Elderlings saga which is every bit as good as the initial volumes in the series.

There is a lot that is different about the world of the Six Duchies which Hobb paints. Fitzchivalry, while not entirely happy, is not being tortured in every way, every day, by the problems of his bastard existence. In a strange way, he appears to have made peace with his many conflicting sides, and is living peacefully, several decades older (but remaining youthful due to his inherited Farseer Skill magic) in an idyllic rural location with his wife Molly.

The Six Duchies, too, are at peace, with King Dutiful on the throne and a brood of other Farseer scions and servants keeping the peace. Even old Chade, that master assassin and fellow Farseer bastard, is living out and proud as a senior advisor to the King.

However, of course, things don’t remain that way in the book, and Fitz’s carefully mended world comes gradually undone through its pages as his buried past comes home to roost. Once more our bastard assassin must take up the mantle of a hero confronting a shadowy evil. I’m sure you’re not surprised by this fact if you’re a seasoned fantasy reader.

I have to say that I was really very surprised by Fool’s Assassin. I came into the book prepared to find that Hobb had rehashed the character development and plot points from our previous sojourns into the world of Fitz and the Fool. So many writers, seeking a continuation of previous commercial success, have taken this path in the past that it has become a substantial cliche.

However, this never happened in Fool’s Assassin. Instead, Hobb drew us thoughtfully into a new story about her favourite Catalyst; introducing new characters, new themes and what I think will evolve into a fantastic new plot, but retaining much of the feel of the old novels. It’s a comfortable fit and an addictive one for anyone who has read a lot of Hobb.

And Fool’s Assassin is also a pageturner. Like its Assassin’s predecessors, it’s a slow burner, but never a boring book. The characters and plot are so intricately woven that you can’t wait to find out what happens to them next. And when the action starts, you really can’t turn away. I read this book very quickly.

If you’ve read this far in this review, you already know what to do. If you like Hobb at all, go and catch up on what happened after Fool’s Fate. It may take you a while to drag through those pages, but rest assured that there is treasure at the end. And be quick about: the next book, Fool’s Quest, is due out in August this year.

In the meantime, tell everyone that Robin Hobb is back. And what a glorious thing for fans of epic fantasy this is.