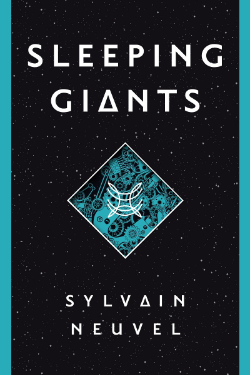 review Sleeping Giants is a highly enjoyable and accessible novel which builds a human story around the well-worn but still fascinating impact of a piece of alien technology found on Earth.

It’s a great time to be a fan of top-tier science fiction literature.

Not only do modern readers have increasing access to all of the great past writers of science fiction books and stories, with their publishers increasingly making available all past content available through platforms such as Amazon’s Kindle, but there is also a rash of young writers coming out with fantastic debut novels.

For example, I was stunned when I picked up Andy Weir’s The Martian several years ago. Here is a book from a debut author, written in first person tense and involving a limited set of characters. It was initially self-published, as I understand it, through Weir’s blog. And yet, the book itself was spell-binding. I consumed it in 24 hours and couldn’t put it down.

In many ways, Sylvain Neuvel’s debut novel, Sleeping Giants, reminds me of The Martian.

Sleeping Giants is not a complex piece of writing. There are plot twists and character development, but they’re not that deep or difficult to predict. The action is all of the straightforward variety. And the narrative is told in interview format, speckled with other content artefacts such as media reports.

Yet it is this straightforward style of writing, coupled with the central conceit of the book, which helps to give it so much appeal.

Like The Martian, Sleeping Giants is action-packed, and its immediate narrative style delivers the feeling to the reader that they are right there in the middle of the action, or perhaps watching it live on TV, with a reporter on the scene providing commentary.

The central conceit of the book – about a piece of alien technology being found on Earth – and the subsequent events – represents an extremely well-worn path for science fiction authors. And when the object found is a giant, glowing hand … well, many readers will probably be able to guess the direction in which things are going.

Yet Neuvel makes it all feel fresh again.

It helps that most of the characters in the book often seem to feel hopelessly naïve about the bigger picture that they are involved in. The politics of powerful nation-states, the might and bureaucracy of the military and even the Machiavellian nature of some of the regular people around us; none of these are new concepts, and of course they’re entrenched across every human society, let alone one which discovers alien technology in its midst.

Yet in Sleeping Giants, Neuvel’s approach lets us adopt the naivity of these characters as our own, and makes his story more accessible. As his characters wonder at the majesty of what they are discovering, and are shocked by the human reaction to it, so does the reader. This helps make the book the page turner that it is.

If there is one criticism of Sleeping Giants, it is this: The book would probably not survive a re-read well.

Neuvel’s debut effort, although spell-binding, is not a complex effort that will deliver further insights upon a re-read. This is not a book like Dune, Hyperion or Neverness. It’s a short, straightforward, visceral read without much in the way of deeper philosophy or insight into human nature, although there is a deeply human story here.

This isn’t a bad thing. But it does signal that with this book, Neuvel wasn’t getting too ambitious. It feels as though he wanted to deliver a tight, focused, addictive read. That’s precisely what he delivered on — and extremely successfully. But it does leave the educated reader wondering how much more was left on the cutting table … how much of a bigger, more complex, bolder, book could Neuvel deliver, if he really set his mind to it? Is there such a book in his future? Or will he continue to focus on this format?

Ultimately I would not at all be surprised if, like The Martian before it, Sleeping Giants was made into a Hollywood-style blockbuster. The book is ideal for this treatment. Hollywood doesn’t always enjoy complexity, or find it easy to portray.

Like The Martian before it, Sleeping Giants is the science fiction fan’s equivalent of crack cocaine; highly entertaining, highly addictive, and designed to be consumed in a single short sitting. I highly recommend it to any sci-fi fan. I’ve already read Neuvel’s followup novel, Waking Gods, and will be publishing a similarly positive review shortly.

Just don’t be surprised if you feel yourself looking for something a little more substantive a few days after the high wears off ;)