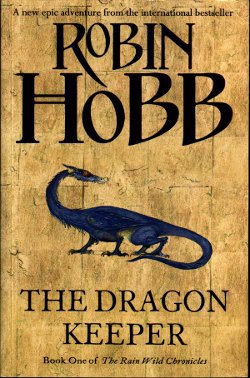 review Dragon Keeper, the long-awaited continuation of the events set in Robin Hobb’s Realm of the Elderlings series, represents a solid accomplishment that that the revered author’s steadfast fans will enjoy as much as a hearty meal.

Spoiler warning: This review contains some important background on Robin Hobb’s Realm of the Elderling series, although it does not contain spoilers for Dragon Keeper. If you haven’t read Hobb’s previous works in this series, you should not be reading Dragon Keeper or this review.

However, the book is ultimately a disappointment due to its lack of challenging ideas. The experienced reader will be easily able to predict the plot and much of the character development ahead of time, due to the abundant clues Hobb leaves littered throughout her text. The sense of deep mystery and Hobb’s glorious ability to gradually reveal the true workings of her complex world are somewhat lacking in her latest effort.

Dragon Keeper is not a direct continuation of the story of perhaps Hobb’s most iconic character, FitzChivalry Farseer, and his companion The Fool. Instead, it can perhaps best be seen more as a sequel to The Liveship Traders trilogy: the middle, and I feel the best, trilogy in the nine book Realm of the Elderlings saga.

The book takes place in the Rain Wilds, the exotic area located upstream of Bingtown, the city where much of the action in The Liveship Traders is set, at a time shortly after the concluding events at the end of The Tawny Man trilogy.

The gradually revealed grand theme of the Realm of the Elderlings saga was the restoration of dragons, and the associated magic and marvels that their presence brings, to a world which had almost forgotten them. The focus of Dragon Keeper, then, is the triumphant emergence of the dragons from the cocoons they entered in the Rain Wilds. The creatures entered the cocoons as serpents; they leave them as dragons.

But, as long-time Hobb fans will perhaps have expected due to her penchant for introducing difficulties her characters are forced to resolve and live with, that re-birth is not quite as expected.

As the book’s blurb notes: “The creatures which emerge from the cocoons are a travesty of the dragons of old. Stunted and deformed, they cannot fly; some appear witless and bestial.”

With the dragons becoming a danger to the humans who tend them and live nearby, the logical next step is to move them to a more appropriate setting; a glorious ancient city the dragons themselves dream of: the fabled Kelsingra.

Hobb primarily tells her story through the viewpoint of several key characters: Sintara, a stunted but arrogant queen dragon who cannot fly; Thymara, a young and somewhat mutated Rain Wilder who faces the pangs of growing up, and Alise Kincarron, a homely Bingtown trader’s daughter obsessed with studying the dragons and their attendant Elderings. Then there’s Leftrin, owner and captain of an old-style liveship.

The author describes the lives of her subjects with pinache. As with her previous books, I found myself fascinated by the details of their daily lives; their sufferings, joys, and ultimately their pursuit of their dreams. I can’t fault Hobb’s characterisation and ability to get her readers to identify with the characters she creates.

However by the end of the book I couldn’t help feel that Hobb did not give those actors a large and dramatic enough stage to play out their parts on.

Within the larger plot arch of the book there are several smaller ones; the strained relationship between Alise and her husband by arranged marriage; the struggle of Thymara with the hostility of her mother towards her malformed and societally ostracised daughter; and the mysterious actions of the rascal Leftrin.

The direction these plots take within the overarching theme of the dragons’ enfranchisement is entirely predictable, and the gradual revelations Hobb leads the reader to can be anticipated well in advance.

In this light, the book is a far cry from Hobb’s Liveship Traders and Farseer Trilogies, and more in the vein of her Soldier Son trilogy, which in many ways also demonstrated a level of plot predictability that leaves the reader with a lack of satisfaction.

Of course, readers wouldn’t be left with this feeling if we hadn’t experienced a much higher quality of writing from Hobb, particularly in the Liveship Traders trilogy, where the clues as to the dramatic revelations ahead are scattered few and far between.

Speaking with my friends, their most memorable moments in Hobb’s previous books came when she finally lets the reader in on a grand secret that had been haunting them through the pages. “Do you remember when you found out about the true nature of The Fool?”, they’ll exclaim. “Or when you found out what the liveships truly are, and why the Paragon is the way he is?”

Ultimately, if you’ve enjoyed Hobb’s previous books, you are pretty much going to pick up a copy of Dragon Keeper. When I saw it in a Dymocks window during lunch one day, I barely remember paying for it, that’s how fast I handed over the money and started reading! But don’t expect the book to be the beginning of another grand masterwork from one of fantasy’s greats.