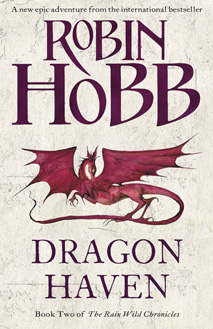 review With Dragon Haven, fantasy master Robin Hobb has begun to rekindle some of the magic that had left her most recent works, particularly the Soldier Son trilogy. The book represents a satisfying conclusion to the two book series –The Rain Wild Chronicles — Hobb has penned as a follow-up to her extended nine book saga The Realm of the Elderlings, while still leaving room for future works in that world.

Spoiler warning: This review contains some mild background on Robin Hobb’s Realm of the Elderlings series, although it does not contain spoilers for Dragon Haven. If you haven’t read Hobb’s previous works in this series, you probably shouldn’t be reading Dragon Haven or this review.

What a seasoned Hobb fan will most note about Dragon Haven is that it contains a great deal of the subtle plot and character creation and gradual world revelation that Hobb had perfected in her Elderlings saga. There is a wonderful undercurrent of ideas and emotions swirling through Hobb’s prose that constantly leaves the reader both guessing and angsty that her characters don’t know the full picture and haven’t worked through their internal turmoil.

But the book doesn’t have the same kind of drawn-out pacing that plagued the Soldier Son trilogy. Instead, I found it a pleasure to read.

I came down pretty hard on Hobb after I finished The Dragon Keeper, the first book in The Rain Wild Chronicles. And now I have to admit Hobb has taken any criticism from myself and others she read on board, and created a book in Dragon Haven that her fans will simply love.

Like The Dragon Keeper, the plot of Dragon Haven takes place in the Rain Wilds, the exotic area located upstream of Bingtown, the city where much of the action in The Liveship Traders is set, at a time shortly after the concluding events at the end of The Tawny Man trilogy.

In The Dragon Keeper, dragons had returned to the world, but in a stunted and degraded form — they could no fly, and some appeared witless and bestial. In short, they were far from the magical and all-powerful beings of legend.

With the dragons becoming a danger to the humans who tend them and live nearby, the logical next step was to move them upriver to a more appropriate setting; a glorious ancient city the dragons themselves dream of: the fabled Kelsingra. Half of this journey was completed in the first book.

Dragon Haven is in many ways a story of being on the road. Like many novelists, Hobb uses the plot device of her characters travelling through various hardships as a method to force them to grow and develop.

In both the dragons’ and the humans’ cases, the journey is both physical, in the sense that as the book wears on, they endure various hardships and traverse much terrain, and internal, in that these external trials serve as mirrors which force the characters to look into themselves and find who they really are.

For the dragons, this means both becoming physically larger and stronger, while also re-learning and remembering much of their power and their glory. For the humans, the struggle is often tied up in their sexuality. For Rain Wilder Thymara, it’s getting past the idea that her physical defects don’t mean she can’t have a relationship or potentially even bear children. For Bingtown wife and dragon scholar Alise, it means dealing with the reality of her marriage and potential future happiness.

And for poor Sedric, it means coming to a dreadful understanding of what his own relationship with Alise’s husband has truly been about.

Like other ‘road’ books, the eventual fate of Hobb’s individual characters, and indeed the entire expedition, is unclear. Kelsingra was abandoned long ago and may not even exist any more. When you add the constant grinding labour involved in even surviving the Rain Wilds, let alone travelling through them, to internal plots within the expedition and even the dangers of sharing the journey with a bunch of unpredictable dragons, it’s hard throughout Dragon Haven to know where the characters and the book will end up.

But I will say this — the eventual ending of the book is satisfying and worth reaching. Although it leaves room for a continuation of the story — particularly with relation to the potential future revelation of more details about Hobb’s world — it does not leave too much hanging.

All of Hobb’s strengths as a fantasy writer are found in Dragon Haven. Complex, realistic, multi-faceted characters who change and grow. A plot that deceives you into thinking you can foretell its changes in direction — and then twists things around on you. Subtle writing that leaves barely traceable hints of information that you really want to know.

And most of all, lurking beneath the surface of everything Hobb does in Dragon Haven, is the gradual, almost scientific revelation of the secrets of the dragons, their magic, and what it all could mean for the future of the whole world.

If you were disappointed by the Soldier Son trilogy and even by somewhat lacklustre first book in the Rain Wild Chronicles series, The Dragon Keeper, don’t lose your faith in their author just yet.

Robin Hobb is back in form. And with Dragon Haven she’s cutting up the fantasy scene once again. I can’t wait to see what she’s got in store for us next.