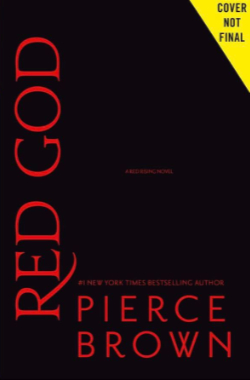 news Science fiction author Pierce Brown has announced that he will publish a seventh book in the Red Rising series, entitled Red God.

The Red Rising series is a series of science fiction novels set in a futuristic Solar System and strongly influenced by the ancient Roman empire, complete with all of its glory, martial vigour and cultural richness, but also deeply tainted by the corruption and vice that inevitably led the Western Roman Empire to fall.

In Red Rising, Homo Sapiens has been genetically shaped into a series of derivative species order by colour. At the top of the pecking order are the glorious Golds, who rule this space empire with an iron fist occasionally cloaked in a velvet glove.

Further down the pecking order are somewhat privileged castes such as Silvers, Coppers and Blues, while at the bottom of the Society’s pyramid are the Reds, the ultimate subservient worker class.

Inevitably, the series is about revolution in a society whose privilege and entitlement has created slave classes that, like Spartacus in the ancient Roman order, must revolt in order to secure even a modicum of freedom.

Since publication of the original Red Rising book in 2014, Brown has published a total of five in the series, including Red Rising, Golden Son, Morning Star, Iron Gold and Dark Age. A sixth, Light Bringer, is scheduled to be released in May 2023.

This week Brown revealed on his Facebook page that a seventh is also planned.

opinion/analysis
I am a huge fan of Brown’s Red Rising series and strongly recommend it as one of the best new science fiction series to have come out over the past several decades.

It will also appeal to those who enjoy the visceral violence, sexuality and general societal conflict found in fantasy series such as George R. R. Martin’s A Song of Ice and Fire.

I am tremendously excited by the news that Brown will be be publishing a seventh book in the series and I will be reading it and Light Bringer as soon as they come out. Wild horses could not tear me away from this one.