Home Fantasy The Eye of the World by Robert Jordan: Review 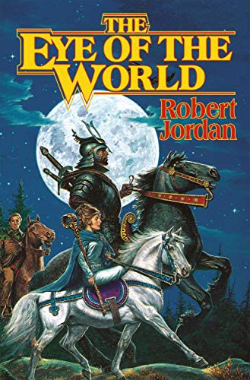 review The Eye of the World is an immensely satisfying high fantasy novel that serves both as a riveting self-contained story full of adventure, honour and magic, and an ideal introduction to the vast world of The Wheel of Time series.

To say that The Eye of the World is a must read for any fan of fantasy literature is to make a colossal understatement.

There has long been a quote by a New York Times reviewer printed on copies of many of Jordan’s books. It states: “With The Wheel of Time, Jordan has come to dominate the world that Tolkien began to reveal.”

To me, this perfectly sums up the relationship between Jordan and Tolkien. Although there were a number of contemporaneous writers, Tolkien almost singlehandedly created the high fantasy genre with the publication of The Lord of the Rings in the mid-1950’s.

Yet fantasy fans looking for the logical expansion of Tolkien’s ideas into a much broader universe representing a larger sweep of human experience were forced to wait almost 35 years until January 1990 with the publication of The Eye of the World to see that promise fully realised.

Jordan’s Wheel of Time universe is not so much grander than Tolkien’s Middle Earth so much as it is just a great deal broader.

Where Tolkien focused on a small cluster of well fleshed out characters, Jordan would introduce a cast of thousands. Where the magic system entwined in the rings was largely obscured from the reader’s understanding, Jordan’s the One Power had a vast and complex system of rules that drove reader satisfaction and interest.

And where Tolkien would dabble in politics, economics, culture and gender relations, Jordan would interweave these concepts into every aspect of his novels in a thousand different variations.

So yes, Jordan is Tolkien’s first true heir, although he would not be the last.

But having said all this, what about The Eye of the World itself? Re-read in 2022, is it actually good? Setting the plaudits aimed at Jordan aside, how does the book actually stand up?

In a word, it’s marvellous.

Canadian author Cory Doctorow has said that fantasy novels start with one of two classic premises; either a stranger arrives in a small town, or one or more of the residents of the town are forced to leave.

The Eye of the World starts with the one and leads to the other.

Very quickly, in the book’s opening pages, we are introduced to what might be described as the five core characters around which the series will revolve for much of its pages. All just ordinary country folks. Rand al’Thor and Matrim Cauthon are farmers’ sons. Perrin Aybara is a blacksmith’s apprentice. Nynaeve al’Meara the local healer and Egwene al’Vere is the daughter of an innkeeper and his wife.

Yet as the minions of the books’ ultimate evil enter the village of Emond’s Field and start to wreak violent havoc, the five find themselves on the run and caught up in what will become the adventure of a lifetime.

The book quickly introduces the reader to the basics of its key premise, being that an ultimate evil (‘the Dark One’) exists in tension with the benevolent creator god of the Wheel of Time’s world; that this being controls earthly minions to do ill; and that this evil is opposed by magic wielders with powers limited by their own customs.

Moreover, Jordan’s central thesis is that the cycle of evil arising (with the inevitable civilisational upheaval that this causes) is doomed to repeat itself again and again over millennia. Humanity must oppose this evil each and every time, or else the cycle of human existence will be torn asunder.

Initially our protagonists are unwilling to be caught up in this struggle and confused as to they are even involved, akin to how Frodo is confused as to why strange things seem to happen around Uncle Bilbo, especially if the mysterious wizard Gandalf is around.

But as the narrative unfolds and the five start to get an outline of the destined fate that may be in store, their resilience begins to kick in and, each in their own distinct way, they begin to grow into the heroes that the reader wants them to be, and that the world needs them to be.

And what a narrative this is.

The Eye of the World has everything that a high fantasy fan wants, in spades.

It abounds with all of the standard fantasy tropes (magic swords, magic wielders, medieval battles, knights, horses and armour, stone castles, the importance of fated heroes, romance, death-defying escapes and thrilling encounters with evil). There are even quasi-werewolves.

But it is perhaps the way that all of these concepts are integrated into a cohesive world that is so satisfying to the reader.

Jordan knows, as Brandon Sanderson has pointed out, that a reader’s satisfaction with magic systems is directly proportional to how consistently the internal rules of those systems are applied.

And Jordan also knows that readers will also find enjoyment from character development when it is organically drawn from the world that his characters reside in, rather than being artificially created by contrived plot paths at the author’s demand (finding the magical ‘macguffin’ to save the world).

In their reluctant passage across his world, Jordan’s characters struggle with their personal problems and ambitions, even as they often express wonder at the incredible journey they are embarked upon. And it’s not always the Dark One that is hounding their heels. Sometimes it’s just the entitlement of the rich, the travails of poverty or the old stalwart plot devices of greed, avarice, lust or envy.

But it is the way that Jordan’s five (and all the others that gradually enter the story) that regularly rise above their own failings, interwoven amongst the standard fantasy tropes, that makes The Eye of the World so satisfying.

When I first read The Wheel of Time in the 1990’s, it was common amongst fantasy fans to refer to the series as ‘The Waste of Time’. Due to the broad and lengthy nature of the series, encompassing so much of human existence, it was common for readers to finish Jordan’s books, only to start reading them again from the start.

But, even 32 years after it was first published, The Eye of the World is not a waste of anybody’s time.

Once you pick it up, I guarantee you that you won’t put it down until you’ve finished all 700 odd pages. And along the way, you will be exclaiming out loud at the richness of Jordan’s world-building vision, the thrilling ride that his characters are on, and the depth of his character development.

Then you’ll realise that there are 13 more books in the series still to read and there goes your entire year.