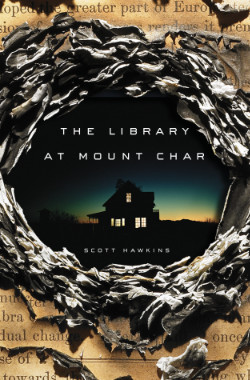 review The Library at Mount Char is a well-written fantasy novel which aches with the potential for greatness. However, its author sadly runs out of steam before the end of the book, letting the reader down and never quite hitting the mark that the book’s first half promises.

Every now and then a book comes along which ensnares me – utterly, terribly, irrevocably – with its first few chapters.

Scott Hawkins’ debut novel The Library at Mount Char promised to be just such a book for me. But then it let me down.

The book’s premise is relatively simple.

There is a house, in an ordinary neighbourhood in America. In this house lives a number of orphans who have been taken in by a man they call Father. As the book’s pages continue to develop, the reader starts to suspect that Father is much more than a man – that he might be something akin to a God.

But not the ultimately forgiving figure of the Christian religion that the New Testament tells us about. Father is more akin to the God of the Old Testament, or the Greek god Zeus, hurling thunderbolts from his mountain.

Hawkins does a lot with this premise. He creates a whole world around Father, mixing our commonplace Western society with a huge fantasy world drawing on many religious and mythical tropes from civilisations all around the world.

Thus the reader is comforted by the familiar (our modern Western society), while also continually intrigued by the mystery that is the world that the Library (the house which Father lives in with his adopted children) exists in. This is well-trodden path – think Neil Gaiman’s American Gods, as well as some of Orson Scott Card’s side projects – but it’s there for a reason. Many fantasy readers (including myself) love this kind of stuff.

Hawkins also wraps the book around a mystery – who truly is Father, and what has happened to him?

For about the first half to two thirds of the book, Hawkins had me hooked. His prose is fantastic, and the world he created was so accessible, told through points of view that were easy to digest, that I just kept on turning page after page, dying to know what was coming next.

I devoured most of The Library at Mount Char within about a 10 hour period.

But then things took a completely different turn.

A little over halfway through The Library at Mount Char, Hawkins makes what I would have to call a classic mistake which is, unfortunately, common to science fiction and fantasy writers, and those who use the same material in other genres – TV and film creators amongst them. Hawkins gives one of his characters too much power.

Through a sequence of events, the central mystery of the story is cleared up. Hawkins gives readers all of the answers to the questions which they have been asking throughout the first half of the book. This, in and of itself, would not necessarily be a large problem – as many writers have done before him, Hawkins could have merely used that plot step as the gateway to a larger mystery. I had thought this was the direction in which he had been going.

But at the same time, one of Hawkins’ characters gets too much power.

Science fiction and fantasy novels usually get most of their tension from the intersection of a character having extraordinary powers (physical, mental, magical and so on), but also being tasked with extraordinary challenges. Much of the drama, then, comes when that character applies their powers to problems which ordinary humans would not be able to solve.

They struggle, then, in a very human way – but on a much greater stage.

The trouble with this is that sometimes writers fail to see that giving their characters too much power dissipates this tension.

This is precisely what happens in The Library at Mount Char. And after this event, much of the rest of the book then becomes a mere explanation of greater context, devoid of the sort of mystery and drama which filled its earlier pages with so much promise.

I found the latter third of the book quite a boring read – which troubled me, given that I had been so spellbound by its first half.

I also wonder where Hawkins could take his characters from here. The Library at Mount Char should have been a book calling out for a sequel. Hawkins, after all, went to the trouble to create a complex world and mythology for the book, as well as characters who should have had an enduring developmental cycle.

But now I feel as though much of this potential was exhausted too early. It’s a real pity – because for most of the book I wanted more – much more.

None of this is to say that the Library at Mount Char is not worth reading.

Neither is it to say that the hype around the book is unjustified. Clearly Scott Hawkins is an author with a great future writing career ahead of him.

But what it does say is that The Library at Mount Char is both a book full of huge promise, as well as, eventually, a substantial letdown. This is not the masterwork we’re looking for. I recommend fantasy fans pick up the book, to keep up with what may well be an enthralling new fantasy universe. But I also recommend that readers ultimately don’t expect too much from this debut effort. If they do, they will end up disappointed.

Here’s hoping Hawkins will be able to deliver something a little more cohesive the second time around. I certainly wish him all the best in his attempt to do so – and I will be following his writing career with great interest.