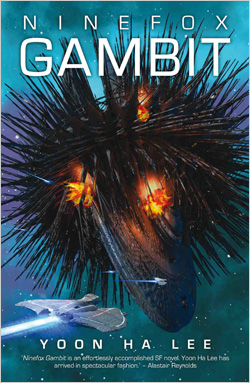 review Ninefox Gambit is an enjoyable and polished piece of military science fiction goodness. Its only real letdowns are a plot which can feel slightly trite at times, combined with the fact that some of the technology it features isn’t explained particularly well.

Yoon Ha Lee is rapidly growing into a well-known name within the global science fiction and fantasy literature community. The author — whose roots are in both the United States and Korea — has been successfully selling science fiction short stories for almost two decades now, and a number of senior luminaries in the community have long taken note of the quality of his prose.

Because of this, although Ninefox Gambit is Lee’s first novel, the author is not precisely an unknown quality, and I’m sure we can expect to see a great deal more quality fiction from him in future, given that it has been so well-received.

Ninefox Gambit reminds me quite a lot of another debut novel — The Quantum Thief by Hannu Rajaniemi.

Like The Quantum Thief, NInefox Gambit is an extremely polished work dealing with a far future of the human race. The two books are both extremely thought-provoking, featuring countless interlocking new technologies and futuristic concepts — brain candy for those of us who love science fiction novels. Both books present these new ideas in stylistic and polished prose that make them a joy to read.

And they both ultimately bring into question what it means to be human.

The setting for Ninefox Gambit, however, is a little different from The Quantum Thief.

Lee’s novel is a military science fiction novel focusing on one primary and one subordinate character.

Kel Cheris is a relatively low-ranking office in a futuristic society which might be termed — or perhaps governed by? — what is called a ‘hexarchate’ — a structure where the ruling class, and likely much of the classes underneath them — are divided into six separate factions, all with different characteristics and aptitudes.

For example, the ‘Kel’ appear to be a highly regimented soldier-like military class, while the ‘Shuos’ would be closest in nature to intelligence corps.

The central conceit in NInefox Gambit is that this empire-like structure is governed by a complex set of mathematical and societal rules based on calendars — years, dates, timing and much, much more, that keeps all in order.

The war, in Ninefox Gambit, is between differing factions which believe in applying different calendrical concepts. So-called ‘heretics’ believe in different systems than the hexarchate, and challenge their rule.

Cheris’ job is to appropriate the knowledge and skills of a long-dead — or perhaps undead — general known as Shuos Jedao in order to win a major battle in this war.

As a novel, Ninefox Gambit works. We get all the hallmarks of an excellent science fiction classic. I was interested enough in the characters and the story to read through, and I’ll probably read Lee’s follow-up novel, Raven Strategem. I wouldn’t have any qualms about reading Ninefox Gambit, if you’re a science fiction fan. You’ll enjoy it.

But also be warned that perhaps not all of the hype is justified here.

For example, although Lee’s plot, on the surface, is intriguing, what lies underneath is really not all that complex or well-thought-through. The reader may come away wondering where the rest of the complexity might lie. The same is true of his characters … neither Cheris nor Jedao really ends up being more than skin deep when it comes to their underlying personalities, motivations and more.

In addition, many readers may come away from the book wondering about some of the central conceits … just what, when it really boils down to it, is “calendrical warfare”?

Why are people making war on each other because of times and dates, or even much more complex mathematical equations? Could changing the day of a holiday celebration really have anything to do with how a weapon functions? What weapons are involved in ‘calendrical warfare’? And so on.

At times, I found myself wondering … just what is the point of all this action? Why is anyone acting the way they do in Ninefox Gambit? What does it actually … mean … that there are people making war on each other over equations and societal structures?

Ninefox Gambit produces a fantastic surface that will entertain your mind. But when you delve beneath that surface, at many points I struggled to make sense of it all. I felt that the conceits made sense when I read them, but when I actually thought about them, they made little sense.

You may especially find this to be the case if you compared Ninefox Gambit to the classic meditation on violence in the science fiction canon, Iain M. Banks’ Use of Weapons, which created a not dissimilar surface effect but does not lose any impact when readers think deeper about its concepts.

Don’t let any of this dissuade you from reading Ninefox Gambit, however. The fact that I have thought about this as much as I have shows that the book’s concepts have remained in my thoughts.

It’s not the best science fiction novel released this decade, or this year. But Ninefox Gambit is a good book. Yoon Ha Lee is a very promising author, most likely with his best work ahead of him. I recommend you give Ninefox Gambit a go and think about the concepts he has created. My guess is he will continue to evolve and develop them as his thinking progresses in future.