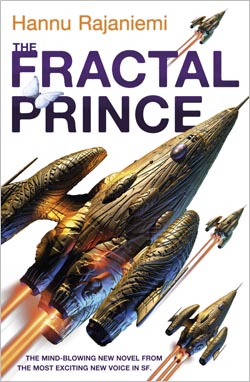 review The Fractal Prince isn’t quite as spellbinding as The Quantum Thief, the extremely highly regarded first novel in Finnish author Hannu Rajaniemi’s post-human Jean Le Flambeur science fiction series. However, it’s still a worthy follow-up, and readers are best advised to continue onto the end for a very satisfying conclusion to this middle book in the series.

I gave very high praise to the debut novel by Hannu Rajaniemi’s debut science fiction novel The Quantum Thief after it was released back in 2010. At the time I wrote that the novel was “that rarest of rare birds” — a first novel by a debut author which is a joy to read and helps take the science fiction genre in general forward.

The Quantum Thief offered a marvellous and incredibly seamless view of a future human race which had scattered across the Solar System but which had also delved inward, splintering into a number of different forms as it pursued various post-human futures. Rajaniemi took many of the themes found in the books of writers such as Charles Stross and David Zindell, but spun them in a much more delicate gossamer web which was a delight to explore.

The Fractal Prince continues that story and is set in that same post-human existence, as well as re-introducing us to a number of the same characters which haunted the pages of The Quantum Thief, including its main protagonist, the thief Jean Le Flambeur.

However, it attempts to do so on a larger stage and with larger consequences than in the first novel. Where The Quantum Thief largely explored Mars and one of its travelling cities, the Oubliette, The Fractal Prince sees Jean journey to Earth. The story tells of the thief’s travels and ultimately the consequences of his actions from the first book, but also paints a picture of a future Earth drastically different from the one that we live in today, merging cyberpunk visions of computer code gone wild with the desert imagery of Arabian Nights. By the end of the book, the various narratives have come together.

The first thing seasoned readers will note about The Fractal Prince is that it is a little less elegant than The Quantum Thief. If the first book’s prose and concepts were unified in a way that, at times, almost felt like poetry, Rajaniemi’s second effort feels a little forced at times; almost as though he had not expected to publish a follow-up novel to The Quantum Thief and wasn’t quite sure how his characters, worlds and advanced concepts would evolve.

But this isn’t always a bad thing. The larger scope gives Rajaniemi the ability to introduce new and interesting characters and to show us a greater Solar System than we had access to before. Then, too, there is more action in The Fractal Prince than in The Quantum Thief, and things seem to move at a bit of a rapid clip. This helps The Fractal Prince avoid the usual problems of middle books in trilogies, which sometimes get a bit stuck in no man’s land between exciting opening and closing chapters of a series.

For my part, as a reader I got a bit lost after reading about two thirds of the book. At times I wasn’t quite clear why we were following a specific character, or why a specific scene as important to The Fractal Prince’s overall plot. In addition, some of the technology concepts took a bit of thinking about to pick up — at times I felt like I was being asked too much of as a reader. Consequently, I did put down the book a few times as I got a bit bogged down.

However, I really have to say that ultimately I forgave Rajaniemi for these issues due to the stellar last third of his novel, which brought a number of plot and character threads together and explained most of the mysteries and references in the book in a very coherent fashion.

I think this tactic is becoming something of a hallmark for Rajaniemi’s writing. He introduces so many concepts at once, in a dizzying display of future-reading virtuosity, that at times readers can get a bit confused. The Finnish author doesn’t have quite the accessibility of a William Gibson.

However, Rajaniemi asks readers to take him on trust that he will explain everything — and in the Fractal Prince he eventually does. This payoff is one of the things that I really enjoyed about finishing The Fractal Prince — that “ah ha” moment where you really understand everything that’s going on and it all clicks into place. It’s incredibly satisfying when you “get” what’s going on as a totality. I suspect a second reading would truly do The Fractal Prince justice, as you would gain greater meaning from the first two thirds of the book as you were reading it.

If you’ve read this far, you know how I feel about The Fractal Prince. If you liked The Quantum Thief, you should be reading this excellent follow-up. If you didn’t read Rajaniemi’s first novel but like authors like William Gibson, Charles Stross or David Zindell, you should start reading Rajaniemi as well. And if you don’t like these authors … then what’s wrong with you? ;)

And, of course, the third book in the series, The Causal Angel, is already out as well. I’m currently reading it and it is very good — expect a full review shortly.