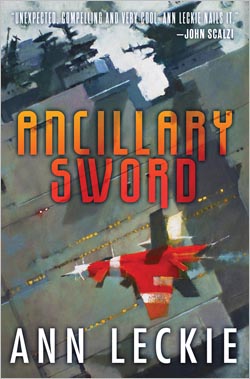 review Ancillary Sword is a worthy follow-up to Ann Leckie’s Hugo- and Nebula-Award-winning debut, Ancillary Justice, and aptly demonstrates the author’s ability to engross readers with an intimate view of her characters. However, the book is let down by a relatively mundane plot and a protagonist who all too often feels like a stage to showcase other characters.

The central concept which Ann Leckie dealt with in her debut novel, Ancillary Justice, was the nature of consciousness in a post-human, futuristic space empire. In the book we see a number of characters, both human and artificial intelligences (spaceships and space stations) who are able to simultaneously inhabit a number of bodies or electronic structures.

Our protagonist represents what happens when one unit of consciousness — an individual biological human being suborned to act as a component of a spaceship’s artificial intelligence — gets ripped away from the rest of its multi-part organism due to its destruction. In this context, Leckie was able to use her protagonist, the human named Breq, previously part of the spaceship Jusice of Toren, as a platform to view the rest of the space society she paints a picture of.

Using Breq as a platform to view Leckie’s universe is particularly effective, because it gave the author a way to compare and contrast the inhuman Breq with another relatively inhuman consciousness — Anaander Mianaai, the multi-human consciousness who is a dictatorial empress of the Radch empire.

It also gave Leckie a way to question just what humanity is, and whether being integrated strongly with machine consciousnesses and data feeds would do to that humanity.

Ancillary Sword represents a logical continuation of Leckie’s exploration of all of these themes. In the book, we see how Breq operates in a different context, with many of her immediate issues resolved through her confrontation with Mianaai, with her own ship and suboordinates to command.

What ensues in the book is what might best be described as a fascinating vision of the complexities of life in the Radch empire, especially the ongoing abrasions resulting from minor conflicts between its citizens, those cultures it has forcibly assimilated, its complex upper intelligences, its military forces and more.

Through Breq’s eyes, we get a vision of how human misunderstandings, greed, desire, as well as love, friendship, compassion and companionship all play out in this world. Technology here is used as a window into the interior of human emotions, as Breq is able to use her ship’s abilities to peek into many different aspects of the Radch Empire.

The joy of Ancillary Sword is that this vision is fascinating. Breq is subtle and it’s engrossing riding along with this former artificial intelligence as she deals with the less analytical, more emotional humans around her. You’ll probably be spellbound until the last page, and in this sense the novel is a triumph, in that it fulfils the primary trope of science fiction: To use futuristic visions and technology to better illustrate what makes us human.

However, the book also has one major problem: Its plot and character development are minimal. The book is like a fascinating painting: the details are endless, but overall it is very static.

For starters, the world and space station which the events of Ancillary Sword take place on could best be described as relatively minor, and the characters never leave that world. It is isolated — a backwater — and the reader is regularly reminded that there are spectacular events taking place elsewhere as Anaander Mianaai fights herself across the galaxy. Just not in front of the reader. The setting of the book is just not inspiring, although the broader universe it sits in is.

The main character of the book, Breq, is so stoic, as a former artificial intelligence, that her character development, while poignant in context, is only minor out of context. A number of other characters are cardboard cut-outs (the “spoiled rich kid”), or just not distinctive enough to really fascinate the reader when they do develop.

Much of the problem is that Leckie is fond of labelling her characters with generic labels. For example, most of the crew of Breq’s ship are referred to by designations such as “Kalr Five”. This fits with Leckie’s universe, but makes it hard for the reader to differentiate between them. Ultimately, we see them as mere objects; ironically, because Breq values their individuality.

In addition, there is very little action in the book. Much of Ancillary Justice was a journey novel, as Breq traipsed around collecting information and objects, while coming to understand her new existence in a kind of coming of age tale. Physical action gave tension during its pages.

In Ancillary Sword, most of the action consists of characters literally sitting around and drinking tea while making polite, nuanced conversation. It’s fascinating polite, nuanced conversation, but even books focused on polite tea parties need to be broken up with more dynamic intervals to maintain reader interest and pace. Ancillary Sword fails this test.

I would advise Leckie to study an author such as Ursula Le Guin. The two authors share a great deal of writing style, but Le Guin’s books are more elegantly sparse while still containing dynamic sections. Paring down Ancillary Sword’s calmer sections and adding a bit of spice would have done the book wonders. Alternatively, a bit more embedded (and visible) philosophic and idealistic differences between the characters would have turned it up a notch.

Ultimately Ancillary Sword is a fascinating read, in the vein of the old-school science fiction masters. Those who enjoyed Ancillary Justice won’t be disappointed by this polished effort; this is a page turner, and you will be engrossed in those pages. Just don’t expect anything much to happen, and if you wanted more dynamic action in Ancillary Justice, perhaps give this one a miss.

Note: The third novel in the Imperial Radch series, Imperial Mercy (in which we hope Breq will re-engage with Anaander Mianaai) should be out later this year.