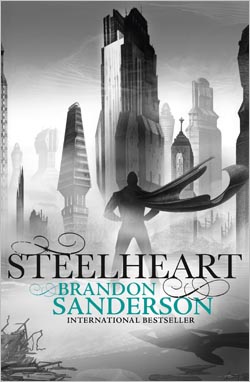 review Brandon Sanderson’s Steelheart novel is, as with all of Sanderson’s work, a quality novel that most science fiction/fantasy fans will enjoy. However, this side project for the fantasy writer suffers from weak characters and a predictable plot that at times feels like it was carved from Sanderson’s generic fantasy template.

If you’re a science fiction and/or fantasy fan, you’re probably very much aware of Brandon Sanderson by now. The American author has published three major notable works so far: His own Mistborn and (in progress) The Stormlight Archive series, as well as his work finishing off Robert Jordan’s The Wheel of Time series after the author’s untimely death.

However, you may not be aware that Sanderson, being one of the most prolific writers currently publishing in the genre, also has a number of side projects. Some of these are more populist in nature, such as the Infinity Blade series written alongside the award-winning video game. Others, such the Elantris series, continue to develop from Sanderson’s earliest publishing days.

And Sanderson has several series aimed at younger readers, namely the Alcatraz and Reckoners series.

Steelheart is the first book in the Reckoners series and focuses on a common fantasy trope, albeit one that is more common in graphic novels: Superheroes. In the novel’s world, a mysterious phenomenon popularly named ‘Calamity’ appeared in the sky like a red comet and gifted many individuals across the world with superhero skills (they are dubbed ‘Epics’, as well as associated weaknesses (think Superman’s problem with Kryptonite).

The book focuses on an especially powerful Epic named Steelheart, who is impervious to every attack and has a number of other incredible powers, such as flying, turning things to steel, and shooting energy bursts from his hands. Steelheart takes over the US city of Chicago and turns it into his own personal empire.

In this context, Sanderson throws his protagonist, an ordinary 18-year-old named David Charleston, who wants revenge on Steelheart for killing his father. Charleston teams up with a group of Epic-killing heroes dubbed the ‘Reckoners’ and heads for the ultimate showdown with his powerful nemesis.

In Steelheart, Sanderson attempts to bring all of these ideas to play. David Charleston, the protagonist of the series, is only 18 years old and often displays traits and naivity common to teenagers approaching their adulthood. Charleston struggles with issues such as respecting authority, following the rules, and even how to deal with the opposite sex.

In addition, there is no doubt that Steelheart is not as complex a book as some of Sanderson’s other efforts. As with most Sanderson works, there are buried secrets for readers to unearth and the characters do change and grow. However, there are less layers than in other Sanderson works such as The Way of Kings or the Mistborn series.

Taken as a whole, what results is a highly serviceable science fiction/fantasy novel. Steelheart, in true Sanderson fashion, is easy to pick up and read it quickly draws the reader in, there’s lots of action, and it’s a pageturner. I read the book pretty quickly — in just a day and a half — which testifies as to the level of interest I had in it. I do recommend Steelheart to those who want to read a lighter and accessible sci-fi/fantasy novel (perhaps if you’ve just finished an epic journey such as The Malazan Book of the Fallen and want something light to refresh your palate).

However, I also want to note that Steelheart is a novel in which we see Sanderson writing far, far below his true capacity as an author.

Unfortunately, Steelheart’s plot and its plot revelations will be fairly predictable to seasoned sci-fi and/or fantasy readers. Its characters, including Charleston himself, are close to cardboard cut-outs, and are not particularly memorable. They do not go through significant character development, and the protagonist never particularly acts like an 18-year-old boy.

The villains in Steelheart are also predictable, with motivations and personalities that appear quite shallow. At times it was laughable just how ‘black and white’ this heroes versus villains story is; although it is possible that things will get a little more gray later in the Reckoners series.

One of the problems here is that Sanderson has already written an excellent superhero-style series which features young protagonists and which deals with themes of growing up in a dystopian society. It’s called Mistborn and it’s a stellar series for young and old. Steelheart appears to take much of the structure of Mistborn, but its characterisation, plot and world-building is substantially inferior, leaving the reader with something that is still entertaining, but simply not fleshed out in the same way that Mistborn was.

None of this is to say that I finished Steelheart dissatisfied; I didn’t. I enjoyed the novel, and it’s worth it’s cover price. However, I suspect a lot of readers will finish it and ask themselves why Sanderson wasn’t working on the next novel in The Stormlight Archive instead of putting this lighter effort out.

Of course, all of Steelheart’s problems can theoretically be explained away by the fact that it’s aimed at a Young Adult audience. The extent to which you accept the novel depends on to what extent you believe authors should water things down for younger readers. Personally, I don’t buy that theory. The Hunger Games was billed as a Young Adult series as well. But it didn’t shy away from either complexity or deeper themes. I don’t think anyone will be forgetting the character of Katniss Everdeen anytime soon. The same cannot be said for David Charleston.