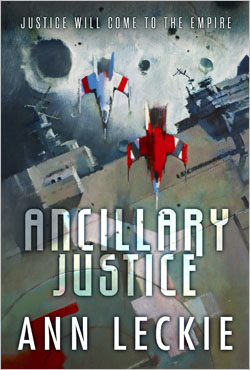 review Ann Leckie’s debut, the Hugo- and Nebula-award-winning novel Ancillary Justice, is a stellar modern day piece of science fiction which will remind seasoned readers of the classic greats in the genre. But it is imperfect and loses its complexity rapidly after its first half. One suspects a more seasoned Leckie will have a true masterpiece to come in a subsequent series.

Ancillary Justice will be familiar to veteran science fiction readers. We’re talking space empires, sentient spaceships, post-humans with implants that allow them to experience quite direct interaction with electronic systems and the artificial intelligences that control them. And, of course, there’s a whiff of utopia and post-scarcity society about it all, as well as a whiff of dystopia lurking beneath the gardenias.

In this familiar setting (as the book’s synopsis tells us), Leckie throws a relatively unusual protagonist representing the book’s central conceit: A human being who was once a functional part of the starship named Justice of Toren: A fragment of an artificial intelligence ripped away from the thousand other parts of its complex and even somewhat alien identity. And we get a familiar motive: Revenge and the quest for the truth.

And along the way, we get all the normal themes which many of the science fiction masters have explored: Futuristic technology which helps to illustrate that which makes us human. Non-humans who can sometimes be more human than their often robotic human colleagues. Galactic war, and violence. Shadowy and mysterious alien civilisations lurking just over the horizon and so on.

In her debut novel, Leckie throws together many elements and themes which together make for well-trodden ground for any fan of the genre. Even fans of Star Trek will see bits and pieces to recognise here.

But the thing is, the debut novelist does it so well. Ancillary Justice is a comfortable book for any sci-fi fan to read. Aside from a few of the cultural references, which can be a little difficult to decipher (the rank system especially, and the book’s many curious names and family names), Leckie makes it easy for the reader to see what ride she’s taking them on, and for them to settle in and enjoy it all. The world of Ancillary Justice is just new enough to be stimulating, while just familiar enough to be non-threatening. And the author’s prose is very smooth.

This is both the book’s strength as well as its failing.

Ancillary Justice reads like a classic of the science fiction genre. It’s not hard to imagine writers like Robert Silverberg or Joe Haldeman putting this kind of book together. It’s polished, and it’s done well. In this context, it’s easy to see why Leckie won both the Hugo and Nebula awards with her debut effort.

But the fact that Leckie has put together such a classive genre story also means that the book will invite unfortunate comparisons with the old science fiction masters who shared those same awards. Science fiction in 2014 is not what it was in the 1960’s or 1970’s (although fantasy is very much in its heyday at the moment). Ancillary Justice would not have won a Hugo several decades ago, although it can today.

If Ancillary Justice had continued for its second half the way it did for its first several hundred pages, which were filled with the delicate process of discovering the somewhat alien intelligence of its protagonist, then the book would indeed have continued on to be a masterwork in the traditional fashion.

Leckie’s characters never quite achieve the depth of the post-human figures in Frank Herbert’s Dune, or the quirky-hiding-complexity nature of Iain M. Bank’s artificial intelligences, although they are probably on par with the characters of a modern day great writer such as Charles Stross. Instead, they end up feeling all too normal, with normal human motivations and feelings. While I tremendously enjoyed the book, I ended up losing interest in its protagonist and antagonists for this reason.

If you’ve read this far, you’ll know how I feel about this book. Ancillary Justice is a great science fiction book which is worth buying, reading and thinking about. I recommend it. It’s well-written, you’ll enjoy it, and it has some interesting ideas. I’m signed on to the Leckie-verse, and am halfway through the follow-up novel, Ancillary Sword. Expect a review of that in a week or so.

However, Ancillary Justice is not a masterwork of science fiction — it’s no Hyperion or Neverness. Leckie probably has a few more novels to go before she reaches that peak. I am very much looking forward to seeing what this very promising author comes up with when she gets to that point.