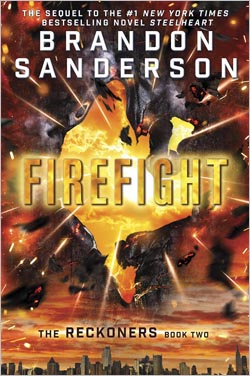 Note: The following review contains spoilers for the first book in The Reckoners series, Steelheart. If you haven’t read Steelheart, you shouldn’t be reading Firefight or this review.

review Brandon Sanderson’s novel Steelheart was based on a number of premises which diverged from the popular fantasy author’s standard fare. The book was aimed at teens, rather than the broad fantasy audience, it featured superheroes set on earth rather than fantastical characters set on other worlds, and it was a lighter, shorter, less deep read than the series such as Mistborn, The Stormlight Archive and the concluding books to The Wheel of Time with which Sanderson has made his stellar reputation.

If you accepted those premises, the book was a success. Accessible to younger readers and more mature fans alike, Steelheart was enjoyable and easy to breeze through. I liked it and gave it a good review.

However, if you didn’t accept those premises (and their usefulness is very much up for debate), then you would have found Steelheart a bit of a frustrating read. Characters with little detail, backstory, character development or depth, a plot that at times seemed relatively transparent and other problems — these were all issues with Steelheart which meant that the book at times felt like ‘Sanderson lite’.

You will enjoy Firefight, then, to the same degree that you enjoyed Steelheart. It’s more of the same fare, with many of the same characters and a similar setting. But it also suffers from the same problems as Steelheart did. In this sense, the book — and The Reckoners series in general — is always going to be a mixed bag.

The plot of Firefight follows directly on from that of Steelheart. We get a new city and a cluster of new characters, including new superhero villains, but we get the same central character — the protagonist of the first book, David Charleston — and many of his satellite relationships remain intact.

As the killer of the eponymous villain of the first book, Steelheart, Charleston has become somewhat notorious in the world of The Reckoners. He’s brought sanity and democracy back to his home city of Newcago, but the newly crowned ‘Steelslayer’ is now being targeted by a number of villainous Epics who either want revenge for Steelheart’s death or to achieve their own notoriety by slaying his killer.

A number of those Epics hail from a different city — Babilar — which is a a future New York taken over by several powerful epics, one of which has raised the water level in the city to halfway up its massive skyscrapers. And so David and several of his Reckoner colleagues head to Babilar to see what’s behind the attacks.

As the novel progresses, we get more plot development in David’s relationships, especially with the book’s titular Epic character Firefight, and we find out more about the background to the world our protagonist lives in, with Sanderson flourishing his world-building skills to strong effect.

However, I have to say that it’s relatively easy to see most of the book’s character development and plot twists coming way ahead of time. This makes it a somewhat mediocre read at times, although Sanderson frequently spices it up with background world revelations and physical action, to keep the reader hooked.

By the end of the book, I felt the way I normally feel after eating fast food. I enjoyed the experience, and it temporarily sated my appetite. But a week later, I barely even remember that I read Firefight, and it certainly didn’t leave me with lasting thoughts that are still floating through the background to my brain, the way major fantasy or sci-fi masterworks tend to.

I want to know what happens to the characters in The Reckoners series, and I’ll definitely pick up the next book in the series, Calamity, when it’s eventually published. But I’m not hanging out for this series to be completed the same way I am waiting for the next books in major series such as A Song of Ice and Fire, The Kingkiller Chronicle, or even Sanderson’s own series The Stormlight Archive.

In short: If you liked Steelheart, I definitely recommend you pick up Firefight. It won’t take you long to read it, and it’s an ideal read after you’ve just finished a major and deep series. Just don’t expect too much of it and you’ll come away having enjoyed the experience.

One final note: If you want to, you can also read Mitosis, a very short Reckoners story set between the two books, Steelheart and Firefight. However, it’s not really necessary — it doesn’t add much to either book.