Home Reviews Use of Weapons by Iain M. Banks: Review 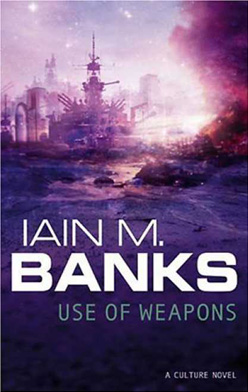 review Iain M. Banks’ Use of Weapons is a thought-provoking, if flawed, meditation on the use of violence as a tool for political and societal development by future highly advanced cultures, and the disturbing personal implications for those doing the dirty work it consists of.

But be warned: Many readers will undoubtedly find the book’s construction extremely frustrating and find it hard to keep going to the final pages.

First published in 1990, Use of Weapons represents one of Banks’ first incursions into the science fiction field after the Scottish author took the mainstream literary world somewhat by storm with his debut novel, The Wasp Factory, in 1984. (A note for confused readers: Banks writes under Iain M. Banks when he writes sci-fi, and just plain Iain Banks when he’s not. We also found this confusing.)

Like many of Banks’ succeeding sci-fi efforts, the book is set in the far future; a time when our galaxy is dominated by a complex and highly evolved society known only as The Culture.

The Culture, a mongrel society composed of many humanoid life-forms and their intermingled offspring, has perfected virtually any technology science fiction literature has been able to dream up over the past century. Gravitational and biological manipulation interstellar travel, advanced weaponry, artificial intelligences with full citizenship rights: The Culture has it all.

And its citizens can live forever; most of them choose to die after only three or four hundred years pursuing whatever pleasures or more work-like endeavours they are interested in. In one memorable scene, a Culture citizen says she’s constructing a new starship just for fun, although machines could do it easier and faster.

But (surprise, surprise), not every galactic resident is as advanced and urbane the peace-loving Culturites. There are plenty of other less developed societies out there causing galactic stinks. Enter The Culture’s Special Circumstances branch; an organisation that appears to specialise in stopping these less advanced civilisations — humanoid, machine or alien — from going postal.

Special Circumstances is mainly represented in Use of Weapons by sex-bomb Culturite Diziet Sma and her robot (or using the book’s label, ‘drone’) Skaffen-Amtiskaw.

The pair make an amusing duo; ironically Skaffen-Amtiskaw displays some of the most human emotions to be found in the book, at least superficially — the drone is often flippant, petty, sarcastic or even heartlessly cruel, whereas Sma mostly just appears dispassionately amused by the antics of the lesser societies she shepherds — when she’s not sleeping with their more attractive citizens.

But Sma and Skaffen-Amtiskaw are really just the sideshow of the book. Its protagonist is the non-Culture soldier known as Cheradenine Zakalwe.

Plucked from obscurity by Sma and filled full of military knowledge, Zakalwe is The Culture’s answer to James Bond; when it doesn’t want to be seen to be getting its hands dirty or just wants to avoid complicated internal ethical debates, it drops Zakalwe in trouble zones to sort out the natives.

But like any other weapon, Zakalwe has a use-by limit, and not even Skaffen-Amtiskaw’s sub-systems have fully plumbed the depths of his past.

There’s no doubt that you’ll spend a few moments contemplating the issues and plot found in Use of Weapons once you’ve finished reading it. Make no mistake; this book is no James Bond-style thriller. It’s a deeply philosophical novel that is more concerned with wry humour about and genuine insight into the human condition than flashy action scenes with laser guns; although it does have several of those.

But frankly, you’ll probably get bored and frustrated along the way before you reach its fascinating conclusion, due to problems with the book’s construction that make it less than a page-turner.

Firstly, despite the book’s fascination with the human condition, Banks’ writing keeps readers at a 10,000-foot view of his protagonists. Very rarely when reading Use of Weapons did I feel connected in any way with his characters; for all the reader empathy they generate they might as well have been robots from the twentieth century.

The problem is not one of plot or character development. It’s just endemic to the way Banks writes. Although his characters do experience deep emotions that verge on unhinging their minds at multiple points during the book, the author does a poor job of conveying that emotion to the reader.

Secondly, Banks has an appalling habit of starting each new chapter in a different time period and place, and with a different protagonist, to the preceding chapter — but without pausing to re-orient the reader.

Often when reading Use of Weapons, you’ll find yourself wondering whose viewpoint you’re following — and on which planet, in which time frame?

Zakalwe as a young man on his home planet? As an old man on a different planet? Sma between planets in space? Often the reader doesn’t know, and this makes Use of Weapons one of those books which you’ll often put down and walk away until you’re in a more patient frame of mind.

The third problem I had with the book was its unbelievable plot. Science fiction and fantasy authors have long known that creating protagonists or organisations with omniscient and all-powerful abilities makes for poor plot development.

The fact that many of the character in Use of Weapons are protected by The Culture’s utopian embrace takes much of the drama and tension out of the book’s action scenes and ultimately deflates the entire framework Banks gradually builds up.

Why, for instance, does The Culture need to employ fallible human agents from other societies against each other? Why doesn’t it just deploy the invincible Skaffen-Amtiskaw with a nuclear bomb tucked under its wing and an ultimatum to stop fighting or the galactic police will pull the plug? Touchy ethical concerns? Give me a break.

If a spider is fighting a bunch of ants in your kitchen, you don’t manipulate them until they stop. You just sweep the whole lot out of the doorway with your broom and go back to reading War and Peace with a cup of tea.

Use of Weapons contains some fascinating ideas about humanity’s far-off possible future, especially when it comes to the difficult question of how, why and when advanced societies should interfere with their backward cousins — and what the impact might be on the actors in such situations.

There’s plenty of hilarious moments in the book, and the discerning science fiction fan should probably add it to their list to get to eventually.

But let’s not pretend Banks didn’t have quite some development to go as a writer when he put it together in the late 1980’s. Use of Weapons is described on its back cover as “ferociously intelligent, both witty and horrific”. That it is. But it’s also described as “a masterpiece”. Well, masterpieces don’t have their readers intermittently cursing them and falling asleep.