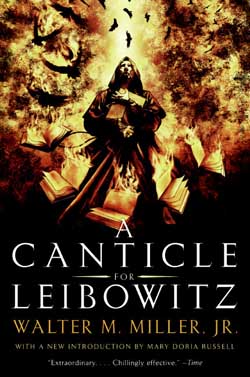 review Science fiction book fans who’ve been around for a while will know that Walter M. Miller’s A Canticle for Leibowitz has one of the best pedigrees in the business. The book won the 1961 Hugo Award, considered the pinnacle of achievement in the genre, and as its jacket notes, is widely believed to be a masterpiece.

But how does this novel with one of the most puzzling titles in sci-fi literature stack up when read in 2009?

A Canticle for Leibowitz is a disturbing and hilariously satirical warning that humanity is doomed to constantly repeat its own mistakes — even if those mistakes are the sort that lead to nuclear holocausts and legions of torch-bearing fanatics determined to burn every book in sight.

But that’s not all it is. Readers will also find within its pages a love for that same humanity’s foibles. As a race, there’s no doubt that sometimes our actions and personalities are too ironic for words, an irony that, it seems likely, both amused and perplexed the author.

The basic event which defines A Canticle for Leibowitz takes place before the book’s pages. Nuclear holocaust, very much a potential future in the 1950’s and the 1960’s with the slow proliferation of atomic weapons across the globe, actually occurred in Miller’s created reality.

Each nuclear attack led to a retaliatory strike; and eventually the world burned, and human civilisation as the twentieth century knew it came to an end. The remaining population, blaming for their misuse the highly educated scientific minds which created the weapons, tore down and destroyed all knowledge in the wake of the disaster.

But in this second dark ages one candle was kept alight … a cloister of Christian monks with a singular vision; to preserve human learning until society was ready to accept it again; and founded in the middle of a desert by an electrical engineer, Isaac Leibowitz.

A Canticle for Leibowitz is structured as three separate stories, set centuries apart, but tied together by the common thread of the abbey and monastic order founded by Leibowitz.

Miller was wise to choose such a structure, as it allowed him to trace and satirise humanity down the ages following its self-created apocalypse. The extended time scale shows up some of the cyclical and predictable nature of human society where a focus on just one timescale would be much more restricted.

And how the author satirises us.

Scientists and the scientific establishment, governments and their leaders, the barbarian book-burning hordes, even the non-religious medical cadre found in modern secular societies: All of these groups and more come under the intense fire delivered by Miller’s scathing and hilarious pen in his satire.

The most cutting sections of A Canticle for Leibowitz are, however, reserved for the clergy.

One of the most poignant messages in the book is that religious groups — with the fanatic devotion that they can harness — are perhaps the only organisations capable of burning the bright light of knowledge in ages of ignorant barbarism.

But there is no doubt the limitations of religious life and the personalities of those who often seek it constantly provide opportunities for satire.

Monks who interpret ancient shopping lists as holy relics; monks who add stylished gold inlaid borders when they make copies of twentieth century electronic circuit diagrams; even monks who treat as a vision the utterings of the second head of a post-apocalyptic genetic mutant; you’ll find all of these and more in Miller’s pages.

It’s with this humour that Miller shows up just how predictable and laughable humans and human society can be. Why, the reader will ask multiple times as they make their way through the pages of A Canticle for Leibowitz, can’t we escape our hubris when it’s so incredibly obvious?

The answer might just be that we can’t. Human limitations mean individuals will never have all the facts necessary to make the best decision for the future of their race or even their own lives.

Reading A Canticle for Leibowitz is a little like reading other satires such as George Orwell’s Animal Farm. Sometimes it can be a little challenging to get through the pages because the real story of the novel is told between its lines, in the reader’s interpretation of its many satirical allusions, which are, of course, presented with a straight face.

Miller’s book is also complicated by the constant use of religious terms and even languages which many readers will not be familiar with. But despite these challenges, the book is an easy read and should be digested quickly by most audiences.

If A Canticle for Leibowitz is a remarkable, cutting and spot-on critique of human fallibility in the face of the sort of power nuclear weaponry can deliver, it is also a more personal tale.

Miller himself served as a radio operator and tail gunner in more than fifty five combat sorties during World War II, when the first nuclear attack in Earth’s history was carried out on the Japanese cities of Hiroshima and Nagasaki. As his bio states, these sorties included “the controversial destruction of the Benedictine Abbey at Monte Casino, the oldest monastery in the Western world”.

It’s impossible not to, with this knowledge in hand, see the book as more than just a warning and a satire. It may also be a tribute from an older and more mature Miller to the generations of monastics whose work at the Benedictine Abbey suffered at the hands of the military he was a member of.

After all, the book reminds, us, despite humanity’s problems, there is still hope for our troubled race.

Read in 2009, A Canticle for Leibowitz retains all of its freshness and vigour. The book represents a hilarious, disturbing and enlightening vision of our young race and will remain a monumental landmark in the science fiction genre, and particularly the post-apocalyptic niche.