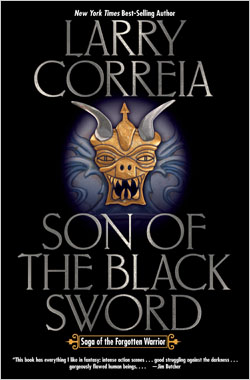 review Son of the Black Sword is a fast-moving and gutsy epic fantasy novel which contains a great deal of the gritty prose which Larry Correia is known for. However, in some ways it feels like an also-ran when compared with Correia’s more inspired Monster Hunter International series, lacking a bit of the author’s trademark energy and humour.

Larry Correia is known as something of an outlaw in the global science fiction and fantasy book scene.

We live in a time when the concept of diversity is coming to the fore in science fiction and fantasy writing. Authors are spending a great amount of time exploring issues such as race, gender, economic equality and other hot button topics.

I’m not personally against exploring any of these issues in science fiction and fantasy literature — far from it. They have always been a core part of the genre. One need only skim the surface of works by authors such as Robert Heinlein or Ursula Le Guin to see them come into play at a very deep and considered level.

And yet, there is also room for authors who provide what Correia has — just a rollicking good read created for mainstream readers in the genre.

Correia’s Monster Hunter International series — which falls into the urban fantasy genre with its focus on the termination of supernatural beasts such as werewolves, vampires and giant alien tree gods — has always provided just that, mixing action-packed scenes with solid plot, character development and world-building.

I’ve laughed many times when reading Monster Hunter International books — and enjoyed them a great deal.

I expected Son of the Black Sword to be more of the same from Correia, who has been nothing but consistent over the years.

However, as it turns out, this first book in Correia’s Saga of the Forgotten Warrior series is quite a different beast.

Son of the Black Sword is quite a traditional epic fantasy novel. We have all the basic constituent elements of the style — magic swords, a hero who arose from poverty to wield a magic sword, evil tyrants who want to possess magic swords and use them to dominate the land, a mythology which resulted in the creation of magic swords, and monsters who the hero battles with his magic sword.

Epic fantasy novels would be nothing without magic swords.

But Son of the Black Sword is not quite Monster Hunter with magic swords; and its protagonist, Ashok, is not quite the gutsy Owen Zastava Pitt born into a medieval setting.

Into this quite traditional mix Correia interweaves more complex ideas; concepts such as the struggles of caste societies historically found in countries such as India, the ethics of law enforcement and policing, and perhaps most of all, the difficulty of personal judgement in a societal milieu which often seems to have decided what your role is ahead of time.

The result is a thoughtful, considered meditation on violence, personal choice and societal change.

It’s not quite Iain M. Banks’ Use of Weapons; but it’s more depth than Correia has given us in his previous, often blood-soaked urban fantasy jaunts.

The glory of Son of the Black Sword is that it shows that Correia is thinking more deeply than, perhaps, he would have in the past.

However, perhaps the disappointing aspect of the book is that it never quite lives up to the promise that this complexity hints at.

Correia’s characters in his previous books were never quite as well-fleshed out, as, say, the tortured pro- and antagonists created by fantasy authors such as Janny Wurts and Robin Hobb. But neither were they cardboard cutouts; they were living, breathing people who we empathised with. People who grew and developed. People I like.

Ashok himself — the titular Son of the Black Sword — is the only truly three dimensional character in Correia’s novel. He does grow and develop. But throughout the pages of the book he always feels a little too mechanical; a little too much like a robot. This, it is true, is a deliberate part of his personality; but it also leaves the reader feeling a little too isolated from his struggles. As Ashok struggles to care about those around him — despite their own suffering — so too does the reader.

The plot, too, is a little too wooden — and although the world that Correia has built is complex and well-thought-out, it also is a little too colourless, as are the antagonists who work their schemes within it.

None of this is to suggest that Son of the Black Sword is not a good book. In fact, it is — it’s a solidly enjoyable read which I would recommend to anyone who has enjoyed Correia’s previous works — or to anyone who enjoys a solid read about a guy with a magic sword. Correia’s established himself now — I’m hooked onto his train and I’m going to keep on reading his books until he stops writing them (which should not be for some time, given that he’s only about 40 years of age).

However, Son of the Black Sword is clearly not Correia’s best work. It feels as though the author — like many before him — perhaps needs to slow his writing pace down a bit; perhaps take a vacation; and perhaps needs to seek some further inspiration to rejuvenate his creative juices. Books take more than forethought and planning; writing them takes real emotion. And that emotion needs to be fed and replenished from time to time.

One gets the feeling that Correia put his heart and soul into the creation of the stellar Monster Hunter International series. I’m sure that he has epic masterworks to come. But Son of the Black Sword, while a solid effort — won’t be remembered as one of them.