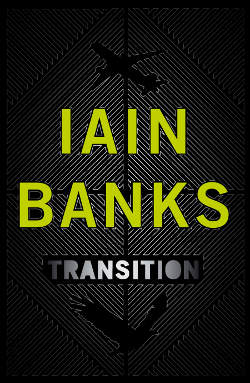 review The new novel by acclaimed British sci-fi and mainstream fiction writer Iain M. Banks is Transition. It’s not a hot book, but it’s very, very cool. And it’ll slide into your consciousness quicker and easier than an icy beer on Bondi Beach in the height of summer.

Transition is an impressionistic novel that excels at slipping complicated concepts and stylistic juxtapositions under your mental radar through the avenue of dazzling you with surface level banality and mild shock factor; Sex, drugs, alcohol, sarcasm, voyeurism, horror. It’s all here. Repeat three times and shake until well mixed.

Much of Banks’ previous science fiction work is overtly concerned with some pretty heavy themes. War (Use of Weapons), racism and sexism (The Player of Games), even the development of civilisations (Matter). But Transition is not a novel (overtly) set in The Culture universe that Banks tends to write in when he’s got his sci-fi cap on.

And it shows. If you were to take, for better or worse, the bits out of those books that you just knew Banks had the most fun writing and collect them together, you’d have Transition.

As its blurb states, Transition is a book set slightly in the future and interested mainly in the activities of The Concern, an “all-powerful organisation with a malevolent presiding genius, pervasive influence and numberless invisible operatives in possession of extraordinary powers”.

This might sound a bit like the Mafia … if it weren’t for the slight sci-fi angle Banks has woven in (and the reason the book is being marketed in some geographies under his mainstream moniker, without the middle initial “M”).

The central conceit of Transition is that with the aid of a drug named ‘Septus’, certain skilled people can send their consciousness rocketing away from their own body and temporarily take over someone elses’ – as long as that someone else is in another universe, of which there are theoretically an infinite number, with every slight or major variant on Earth that anyone could imagine.

You can see the possibilities. Want to sleep with your boss’s wife? Just zip into his head in a universe slightly different from your own, and carry out the deed. Want to be thin, fat, short, tall, or anything in between, speak Italian, BE Italian? Bob’s your uncle. Come home to your own body in your own universe when you want to, or just stay in someone else’s … achieving immortality along the way as you keep on switching every time you get old.

Some other, rather unorthodox uses of the Transition technique are also possible … for example, having multiple successive orgasms through transitioning repeatedly into people’s bodies who are having sex.

Sounds like a utopian vision … but of course, things aren’t that simple.

The Concern controls the drug Septus, as well as almost all known ‘Transitioning’ activities and research about the phenomenon. Its agents can be found throughout the many worlds.

And although its aims are generally positive – to use its agents to promote the well-being and advancement of the human race through heading off calamities in the many dimenions – it doesn’t take well to rebellion within its ranks. Transition is an impressionistic and highly stylised journey through something which might be called a rebellion against the Concern, as well as the phenomenon of Transitioning.

In the past I’ve criticised Banks’ style of telling interwoven stories in his books (see my review of Use of Weapons), but in Transition it works well, because the author labels each new chapter with the viewpoint of the character narrating it.

In general, the book flows very well. Critics will inevitably complain that there is not enough action, that the sci-fi is ephemeral and not perfectly explained, that the book doesn’t delve deep enough into philosophy and so on. And these are all legitimate complaints about the book, on a surface level.

However, those who place importance on such things will miss the main point. Banks achieves, in Transition, what all good sci-fi writers should aim to achieve. He uses advanced technology (indistinguishable from magic) to better illustrate what truly makes us human.

In Transition, Banks has attempted a fascinating exploration into Solipsism, the philosophical idea that one’s own mind is all that truly exists. As Wikipedia puts it, Solipsism posits the idea that “the external world and other minds cannot be known and might not exist”.

There are a few points in the book where Banks’ characters discuss the idea. But more than that, Banks has clearly had the concept in mind when creating his characters and developing them through plot interactions. As the author explored war, violence and power in Use of Weapons, Transition is a meditation on Solipsism. To treat it as anything less – as some critics are doing – is to miss the author’s true intention.

Transition is not for everyone. Many will be turned off by Banks’ disaffected style and his demand that readers dig a little deeper and work for their literary reward.

But for those who are willing to push through Banks’ subtly sardonic veil to see what’s beyond the sex and cocaine haze, you’ll find a fascinating journey that will, above all, leave you wondering: Where and who am I, really?