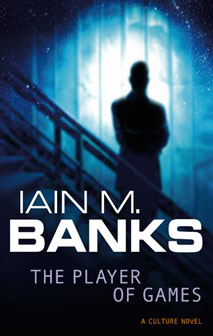 review Trying to find the most logical way into Iain M. Banks’ sprawling Culture series, but been turned off by the abstracted Use of Weapons, the obfuscated Inversions, or even his somewhat flawed first Culture novel Consider Phlebas? Look no further. The Player of Games is probably the best book for you.

One of Banks’ tightest Culture novels, The Player of Games represents the British author writing science fiction at his most accessible. As with the other books in the series, one of the book’s main functions is to display the vivid complexity and richness of human ideas that The Culture itself represents. In many ways, Banks’ Culture novels are a guiding post to what humanity could become; an urbane future, galactic society with powerful ethics, powerful technology, and an even more powerful love for all things pleasurable.

But where many of Banks’ other Culture novels feature several complex post-human protagonists and jump between their vastly differing points of view, The Player of Games features just one. This structure — and the fact that that protagonist eschews much of The Culture’s more exotic mores, and is thus much closer in outlook to today’s reader — makes the book much more highly accessible and a tightly woven read.

That protagonist is Jernau Morat Gurgeh. Gurgeh is typical of many Culture citizens; he lives on one of its massive, constructed ring-planets (dubbed Orbitals), he has its post-human genetics, with an ability to internally create and digest any known drug, and he also has the Culture’s penchant for enjoying every pleasure known to the galaxy, with gusto.

Gurgeh is one of the Culture’s most famous and skilled game players. That is, he excels at any game of diversion that involves intellectual stimulation. Modern examples might be chess or checkers — but in the Culture, games have evolved to somewhat of an art form, with some taking days to complete. And Gurgeh is an acknowledged master of them all.

As many artists at the pinnacle of their profession do, however, Gurgeh has gotten bored. He can easily beat all but the most skilled professional opponents. There are still challenges to accept, but few give him any sense of real competition. And it’s this dissatisfaction with his main occupation that appears to be poisoning everything else the master game player participates in.

Thus, when a set of unusual events occurs that leads him into contact with an unstable drone (the Culture’s extremely intelligent and quirky brand of robots) and eventually, into a jaunt to an alien space empire with the Culture’s Special Circumstances branch — its complex combination of espionage and early stage intervention forces — it doesn’t appear that Gurgeh’s too unhappy to sign on for a tour of duty.

Especially when the Culture needs him to participate in what may be the most complex game ever invented by a humanoid life form; a game which shapes its entire society and has life or death outcomes.

From here on out The Players of Games is vintage Culture. Banks uses the lens of an alien civilisation to display his primary vision of humanity to great effect; its decadence, its tolerance, its advanced systems of ethics and thought and its technology in action.

But the book is also much more than that.

It’s the story of an artist who has been protected for his entire life; allowed to pursue his passion without compromise; sheltered from all forms of violence and able to reach fulfilment, suddenly thrust into a world which is much more brutal, emotional, turbulent, and even vicious.

And it’s about how all of that impacts on him.

The striking thing about the subject matter of the book is how Gurgeh reacts to events. The Culture’s view on violence, even sexualised violence, and the less civilised galactic civilisations that allow it as an everyday event, is complex, and this shows in Gurgeh’s reaction to it. Many would turn away from it; deny its existence to themselves, reject it. The Culture’s approach is different, in that it understands and faces the darker sides of humanity.

This does not mean that it condones, or even in many cases, allows violence to take place. But it does mean that it doesn’t look away from violence. And it acknowledges that sometimes violence is necessary — as when an entire benign civilisation comes under unprovoked attack from without.

The Player of Games is the second Culture novel, and textually, it shows. In my review of the first book in the series, Consider Phlebas, I noted that the book “sprawls”. I wrote:

“In any other popular science fiction writer’s arsenal, the novel would no doubt be seen as their masterpiece; its engrossing narration, the consideration to which its author gave the world he built in it and the characters he portrays would combine to make the book one of the greats.

However, read in the context of Banks’ other Culture novels, it is clear that when the author published Consider Phlebas, he was struggling with both the form of the novel itself, as well as the need to tell a finite story in the world of infinite complexity and interest that he imagined in the Culture.”

When writing The Player of Games, Banks was clearly much less ambitious than when he was putting Consider Phlebas together; and it shows. Although the book covers much less ground, it does it so much more successfully; its more limited scope allows it to shine clearly. Banks learnt much from Consider Phlebas.

The Player of Games’ messages are clearer, its limited set of characters more defined and its plotline more tightly woven. Hints are strewn throughout the book as to the ultimate motives and actions behind the set of events at the forefront of the narrative, but they are not obvious, and Banks does a great job of gradually revealing his story, without going too fast or too slowly.

Ultimately, because of its diminished scope, The Player of Games is not a masterpiece of science fiction; not even a flawed masterpiece like Consider Phlebas. But what it is is an absolute classic of the genre that every sci-fi literature fan should pick up. It’s a triumph; it marks Banks’ coming of age as a science fiction master. It’s a solid gold nugget of enjoyable goodness which will remain in your memory for years to come.

And also — critically, given the complexity of the narrative of some of the other Culture books — it represents an ideal introduction into this ambitious vision of the future of humanity. Read this (or perhaps the later novel Look to Windward) first, before you experience the rest of the Culture series. It’s a fantastic set-up for the bigger Culture universe out there. And it’s a thought-provoking window into humanity’s future soul.