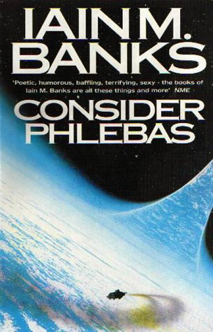 “Gentile or Jew
O you who turn the wheel and look to windward,
Consider Phlebas, who was once handsome and tall as you.”
-T. S. Eliot, The Waste Land (IV)

review Like T. S. Eliot’s epic poem, Iain M. Banks’ first Culture novel, Consider Phlebas, is an incredibly complex book, in which the author packs a massive amount of ideas detailing his startling vision of the future of humanity and the universe itself; ideas that were fated to only grow to complete maturity over the next two decades as he fleshed that vision out into what has become his epic series of Culture novels.

Read 24 years after it was first published in 1987, it is apparent that Consider Phlebas is what might be termed a flawed gem of modern science fiction.

In any other popular science fiction writer’s arsenal, the novel would no doubt be seen as their masterpiece; its engrossing narration, the consideration to which its author gave the world he built in it and the characters he portrays would combine to make the book one of the greats.

However, read in the context of Banks’ other Culture novels, it is clear that when the author published Consider Phlebas, he was struggling with both the form of the novel itself, as well as the need to tell a finite story in the world of infinite complexity and interest that he imagined in the Culture.

As a novel, Consider Phlebas sprawls. It does not have the neat completeness of The Player of Games, nor does it have the contained pathos evident in Look to Windward. It does not go into the right level of detail as Excession does, and it does not contain the balanced level of nostalgic emotion that Use of Weapons does.

What it does have is all of these things; in places too much of one, in other places not enough of another.

None of this is to take anything away from the book. Its entrance into the science fiction genre in 1987 immediately established Banks as a master of that genre, and one of its most creative thinkers and best writers. But it does mean that in 2011, we can appreciate Consider Phlebas as what it is; Banks writing at what was — for him — at an adolescent level. For anyone else, that level itself would probably be out of reach.

The plot of Consider Phlebas represents nothing less than one of the greatest societal events Banks’ futuristic Culture society has ever known.

The Culture — an urbane, pleasure-seeking, genetically modified future version of a human galactic civilisation, which denies itself nothing except the harm of others — is at war with what might be termed its polar opposite; a race of inhuman aliens which believe in one single religion, one discipline, and is spreading itself across the galaxy with the aim of bringing all under its umbrella: The Idirans.

In the midst of this conflict, one of the Culture’s Minds — the supremely intelligent and benevolent artificial intelligences that run their artificially constructed planets and planet-sized spaceships — has become stranded on a distant planet quarantined by an evolved and all-powerful being as some kind of shrine to death.

Into this conflict comes a complex third party; a humanoid shapeshifter, able to change his appearance, identifying marks and much of his basic bodily structure at will.

The mission of this Bora Horza Gobuchul? To steal the mostly defenseless Mind from the planet and hand it over to the Idirans. His motivation? Horza believes The Culture’s dependence on artificial intelligences to run its society — utopian though that makes it — has in truth made the civilisation a society of machines, representing a departure from biological evolution.

Of course, it’s not as simple as that.

Ironically — as he’s not part of it — Horza’s journey to retrieve the Mind becomes a tour by Banks of The Culture itself.

Its complete mastery of technology. Its idiosyncratic artificial intelligences, which normally behave in a more human-like fashion than the humans themselves. Its incredible compassion and implacable desire to live and keep living; but not just living — soaking itself in every pleasure that anyone could believe could exist. Its fearlessness and tolerance of any idea, but conservative nature when it comes to true evolution onto a higher universal plane.

Its complete anarchy; but also its rigid organisation and centralised planning.

Along on the tour bus with Horza and the reader come the normal rogues gallery common to space operas; a violent, self-serving crew who will each gradually divulge their own reasons for living and existing in such a complex galaxy; before they ignomiously die. Of course; not all die ;)

If you were to say anything about Consider Phlebas, you’d say above all, that Banks attempted to pack too much into the book.

In The Player of Games, for example, The Culture is much more gradually and delicately introduced to the reader; Banks allows his characters and the plot itself to explain more about his multi-faceted world than he does through the book’s own exposition.

The vision that Banks has of The Culture is obviously too complex to be fit into one volume; and in fact it can only be told properly through glimpses of its many facets; the way that Banks has told it in many different novels through the 25 years since Consider Phlebas was published.

Then, too, Banks’ characterisation is not fantastic in the book.

Horza’s basic reasons for opposing The Culture with his life are never that convincing; nor does Banks ever really flesh out the rest of the motley crew he constructs for his wide-ranging space opera. Some of them do, but most of the characters never develop and grow much. They remain cardboard cut-outs throughout most of the novel.

Plot, too, suffers; the book is broken up into many segments, and it takes too long to get to its main event. Action scenes are drawn out, meaning suspense is not created as successfully as, say, in later Banks books such as Use of Weapons. Even worse, Banks feels the need to create multiple epilogues after the end of the book to wrap up the whole plot in a nicely tied package.

This is not something an accomplished author would do.

Yet, for all the flaws in Consider Phlebas, it remains a striking vision.

It’s hard to believe that Neuromancer, William Gibson’s vision of a future dystopia, was published just three years before Consider Phlebas, and that Dan Simmons’ epic Hyperion was published two years later. Because Banks’ book ranges much further than either of these two masterpieces do.

There are many similarities between Hyperion and Consider Phlebas, in fact; both feature futuristic galactic civilisations which have virtually mastered technology, including the use of phenomenally powerful artificial intelligences.

And yet Banks, in Consider Phlebas, has thought through the mechanics of his world in far greater detail than Simmons did. And his characters are more real, less cartoonish. Their sharp emotions cut the reader, while their flaws remind us of so much that is human about ourselves.

Consider Phlebas doesn’t have the polish of Hyperion; and it doesn’t have the raw intensity of Neuromancer. But in many ways it doesn’t have to. Because the scope of Banks’ vision is so much grander than those of his compatriots. And in later novels, he would refine his technique and his energy to a high art.

If you’ve read this far, I probably don’t need to tell you that the book is worth reading; and in fact you’re probably actually reading this review itself for nostalgia value only. But if you haven’t read Consider Phlebas, Banks’ first science fiction masterpiece, get out there and do so. It’s a flawed gem, but one that belongs in the hall of fame.