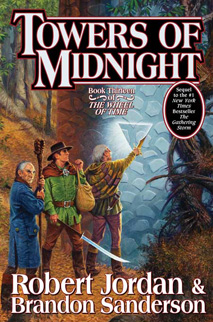 review Disappointingly, given the high standard of the previous Wheel of Time book Sanderson authored – The Gathering Storm – Towers of Midnight will go down in history as one of the poorest books in The Wheel of Time canon.

Whenever I’ve thought a bit deeper about the prodigious talent that is American fantasy writer Brandon Sanderson over the past several years, one question has gradually risen to the surface of my mind.

That question is: Is Sanderson up to the incredibly ambitious task he has set himself, of satisfactorily finishing off one of the most complex and influential epic fantasy series of all time (The Wheel of Time), as well as starting another of similar magnitude (The Stormlight Archive) and keeping various assorted other writing endeavours on track?

With the publication of the thirteenth book in The Wheel of Time series this year, that question has finally been answered. And the answer is a resounding “no”.

The tome is plagued by many faults; a lack of true feeling for how to write several characters, unsatisfactory conclusions to several of the Wheel of Time’s longest-held paradoxes and plot lines, and a lack of exciting action as Sanderson tries to tie off all of the threads that the series’ founding author Robert Jordan left hanging for so many years.

After finishing The Gathering Storm, I wanted to leap up and proclaim to the world that Jordan had found a true successor in Sanderson. I was jubilant that the series would find a satisfying end.

After finishing Towers of Midnight, I wanted to mail it back to Sanderson and his editor, Harriet McDougal, with about a thousand red lines to make sections that needed to be deleted or revised. It’s simply that bad. This should have been in the oven for another year or so, rather than rushed out; and as a veteran editor, that should have been apparent to McDougal.

Towers of Midnight begins the plot cycle which is The Wheel of Time’s long-awaited endgame; the end war that will determine the fate of its world. Tarmon Gai’Don, the Last Battle, is coming, and the whole book is overshadowed by that knowledge.

Accordingly, every major player and faction in the Wheel of Time universe has begun to head towards that ultimate destination. New Amyrlin Egwene Al’Vere is consolidating her power inside the White Tower. In Caemlyn, Elayne is doing the same with her monarchy. Perrin is slowly gathering a vast, disparate army to him.

Having survived the internal and external storms of his past, a new peaceful Rand Al’Thor, the Dragon Reborn (or, as he has been dubbed online, Randzen) is now also gathering his global resources – political, military, Power or otherwise – to him as he too prepared for the Last Battle, which has already started to touch the Borderlands as a massive nightmare of Shadowspawn boils out of the Blight.

Unusually for someone who has gotten himself almost continually in trouble for most of the Wheel of Time, Mat’s time these days seems to mostly constitute sitting on his fat ass in Caemlyn making eyes at various women and ruminating on the perils of being married.

No kidding, that’s most of what he does.

Now what I really hated in Towers of Midnight was the extremely trite way in which Sanderson ties off so many of the meaningful plot threads that have tortured Wheel of Time fans for the best part of two decades now.

Things like … what’s the endgame for Perrin’s Faile/Berelain paradox? How will Mat and Thom deal with the Snakes and Foxes and save Moiraine? What will happen to fated King of the Malkier, Lan Mandragoran? Who killed Asmodean? What’s really going on at the Black Tower? Who is Mesaana in the White Tower? When will Mat invent cannons? And so on and so on.

If you can think of the most obvious and boring ways to answer all of these questions, then you’ll be able to guess how Sanderson answers them in Towers of Midnight.

When I found out the answers (and not all of them have been completely filled out yet), the curiousity I had been holding in for more than a decade now was not sated.

At some points I literally leapt up out of my seat and shook my fist at the sky, cursing Brandon Sanderson’s laziness in resolving thorny plot points which Wheel of Time fans have been obsessing about for so long. There were better ways to do this; and I cannot believe that Jordan would have approved of all of the answers that Sanderson gave us to these questions.

Another major problem with the book is how Sanderson treats Mat.

Mat – a fan favourite – has always been a dynamic character. But in Towers of Midnight he does very little throughout the whole book apart from sit on his fat ass in taverns, musing about dice, drinking, eyeing women and so on.

The way that Sanderson writes Mat is more or less spot on; his mental tone is pretty good. But, goddamnit, IT IS NOT THE JOB of the Band of the Red Hand to encamp itself outside a goddamn city and sit there for a whole book, even going on little excursions for Elayne like a pet army. His army reflects Mat’s own life, and both do very little in Towers of Midnight at all. No battles, no action, not even any good drinking or chasing women. Nothing.

The Band of the Red Hand is supposed to be KICKASS AND KICK SOME ASS like it used to. As it stands, Sanderson has reduced Mat’s KICKASS ARMY into a cohort of little girls who whimper when anything which even looks like a Gholam or even a goddamn Aes Sedai enters its heavily guarded perimeter.

Ultimately, there are really only two things that I liked about Towers of Midnight. The first is how Sanderson treats Perrin.

For the first time in a long while, Perrin gets some limelight, and he features in some really inspirational moments which are well written (you’ll know them when you see them … has a lot to do with the hammer and its own endgame). Sure, Sanderson fails the whole Faile/Berelain thing, but he does a lot of really great stuff with Perrin, and you have to give him credit for that.

If Towers of Midnight is about anything, it is about Perrin. This book is the first to truly give the understudy third Ta’averen a decent go, and I applaud Sanderson for that – even though he had virtually promised fans Towers of Midnight would actually be about Mat. Which it is not.

The second thing that’s great about the book is that Sanderson gives some little cameos to Lan.

Without giving too much away, it’s obvious that Sanderson is building Lan up with an incredibly slow burning plotline which is going to pay off in a glorious way in the upcoming last Wheel of Time book, A Memory of Light. And we can’t wait for that to happen. I have a feeling that when Lan gets the justice that is coming to him, readers are going to want to be sitting next to something sturdy so they can pound their hand on it and yell “FUCK YES”.

What’s coming is that good. These sections had a pretty Bruce Willis feel about them.

Why did this happen?
At this stage of the review, I’d like to espouse a theory which I think explains why I think Sanderson was unable to reach the peak of his writing with Towers of Midnight, and why he had problems with some of the characters; not so much how to write them (mostly that works, although not always; there are many awkward, out of character moments), but how to make them interact with plot; how to get them to do things rather than think them.

It’s simple: His attention was divided.

Sanderson is currently working on two of the human race’s most epic fantasy series; The Wheel of Time and his own The Stormlight Archive, which is slated to be a ten book masterwork akin to Jordan’s own masterpiece.

To do artistic justice to both series is simply impossible; a fact Sanderson himself must suspect. They are too complex; the characterisations and plotlines are too deep; and I can’t think of any author in the history of fantasy writing who has been able to pull off delivering two masterworks at the same time.

It’s called a masterwork for a reason; you can only do one.

Furthermore, when you look at the strengths of Towers of Midnight, it’s seems apparent that Sanderson’s mindset when writing the book was very much influenced by The Way of Kings.

The two characters who are best written in Towers of Midnight — whose thoughts and actions seem most authentic and touch you — are Perrin and Lan; in both cases Sanderson nails who they are and delivers some fantastic moments where you start to believe in The Wheel of Time again.

In what is probably not a coincidence, these two characters are pretty close analogues of two of the three central characters in The Way of Kings; Kalak (a Perrin duty-type analogue reluctantly drawn into leadership and gifted with powers he does not understand) and Dalinar Kholin (a Lan-style inspirational but hard-beaten leader with shoulders heavy with duty and with the honour of a people and a way of life to uphold).

It is simply not surprising that Sanderson succeeded with these characters (but little else) in Towers of Midnight; artistically, and creatively, his head is in The Stormlight Archive right now, whereas it was in Jordan’s universe when he put together The Gathering Storm.

One further thing: There is no “Mat” character in The Way of Kings. Hence, it is unsurprising that Sanderson struggled with the chaotic fan favourite and his riotous Band of the Red Hand in Towers of Midnight. Mat does not believe in duty; whereas The Way of Kings is about nothing if it is not about duty.

To tell you the truth, I don’t blame Sanderson for any of this.

There is simply nobody else who could do a better job of finishing The Wheel of Time than Sanderson could, apart from Robert Jordan. And we don’t have that option. We should be amazingly happy that Sanderson is carving off some of his prodigious writing (and organizational) talent from his own epic series to devote it to The Wheel of Time. The Stormlight Archive itself is shaping up to be one of the best epic fantasy series of all time and a definite match for Jordan’s own masterpiece.

However, let’s not pretend it’s possible for one man to do justice to two incredible series like The Wheel of Time and The Stormlight Archive at the same time. Along the way, there will be compromises, poorly written bits and disappointments.

Towers of Midnight is one of those. Jordan might not be rolling in his grave right now. But he is definitely shifting around uncomfortably as his masterwork is slightly shortchanged.