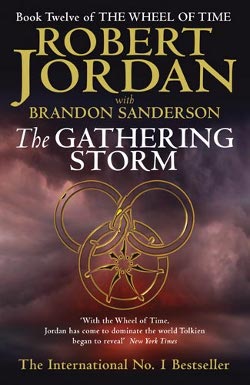 Considering that Robert Jordan is no longer around, it is remarkable that The Gathering Storm is so true to the vision of the series’ original creator, and a worthwhile 12th book in the series that scores on a large number of levels. It’s simply thrilling to be thrust back into the world of The Wheel of Time.

Don’t even bother reading this review of The Gathering Storm if you haven’t read the previous books in The Wheel of Time series. This is the twelfth book, and spoilers about the previous eleven will crop up in this review.

God, I’ve missed it so much. I had a very emotional reaction to this book. The question of whether Jordan substitute Brandon Sanderson is up to finishing the series has been answered. He is.

Thank you, Brandon Sanderson. Not only did we enjoy your stellar Mistborn series, along with the rest of Team Jordan, you have already gone some way towards realising the dreams of likely hundreds of thousands (millions?) of Wheel of Time fans who have been dying for this series to be finished in a way that will honour Robert Jordan, arguably the best fantasy author of our time. Keep up the good work.

That’s not to say that Sanderson has done as good a job as Jordan could have. There are many places in The Gathering Storm which make it clear that its delivery has suffered from Sanderson’s smaller vision. But the book is perhaps as good as it could possibly have been, without Jordan himself to write it.

For those of you who have lost patience with, as some call the series, The Waste of Time, this is now the time to jump back in and get up to speed on all things Rand Al’Thor and his merry band of Two Rivers folk. The end will come in the next few years, and The Gathering Storm is the first step in that journey. For anyone still wavering keep reading this review as I outline the book and provide some criticism.

If you are lost (and who can blame you) as to where the plot stands before The Gathering Storm, we recommend you read Dragonmount‘s plot summary (PDF).

As the book begins, the countries of the world of The Wheel of Time are in chaos.

Many are still reeling from the invasion of the Seanchan, the returned armies of Artur Hawkwing’s son from across the oceans. Others have suffered extensive upheaval due to the machinations of the Dark One’s top lieutenants, the fallen channellers known as the Forsaken.

The White Tower, the home of the female Aes Sedai, is suffering its own frosty civil war, with Tar Valon besieged by a rebel cadre of Aes Sedai, and even the Aiel have suffered their own discord, with bands of the Shaido clan still scattered across the land.

The situations of the heroes we have come to know and love so well over the past eleven books are no less chaotic.

Rand Al’Thor, the Dragon Reborn, appears to be spiralling downwards as he wraps himself ever closer in his steel cloak of mercilessness and – at times – indifference to the suffering of others. The Lord of the Morning, it appears, has been pushed too far and been forced to kill too many women. His heart has turned to blackest night.

Fellow Ta’averen Perrin and Mat are scattered around the world, leading disparate bands of armies that they plan to eventually meet with Rand’s forced to take on the forces of evil in the Last Battle. Elayne is consolidating her power as the new Queen of Andor, while Nynaeve is by Rand’s side, as are Min and Aviendha.

Perhaps the most interesting situation for one of the main protagonists in the story is that of Egwene Al’Vere. Raised Amyrlin by the rebel Aes Sedai who had congregated at Salidar but then marched on Tar Valon with an army led by one of the great generals of the time, Gareth Bryne.

After being captured by the White Tower Aes Sedai, Egwene is continuing within its own walls her resistance against the unstable rule of the Tower’s Amyrlin, Elaida. The only caveat is that she is doing so after being reduced to novice status again and while suffering repeated beatings and other indignities at the hands of Elaida’s underlings.

The Gathering Storm primarily follows the individual storylines of Rand and Egwene. As the book goes on, the difference between them becomes starker and starker. Rand’s problems mount, and he begins to fail to keep on top of them, or even to function normally when relating to those around him.

By contrast, Egwene takes on an almost Gandhi-like determination and stance towards her own suffering. She increasingly forces herself to rise against her pain and act for the unification of the warring Aes Sedai factions.

The choice to focus on these two central characters in the pages of The Gathering Storm was a wise one, whether it was made by Jordan or Sanderson. Finally, after several books worth of getting lost in twenty different character viewpoints, the series settles on some rather large questions and resolves them. And some of the climactic scenes involving the pair are highly dramatic – the kind of stuff the first few books in The Wheel of Time were filled with.

The Dragon Reborn taking the Stone of Tear kind of stuff, or claiming the Aiel.

The downside of this approach is that, as many other reviewers and fans have pointed out, we see relatively little of the popular Ta’averen Mat, or other major characters like Perrin. And we see nothing of Elayne at all.

This problem is made worse by the fact that Sanderson pretty much fluffs the Mat chapters completely, missing the constant yet understated humour found when Jordan writes from Mat’s viewpoint and hamming it up big time. Yet again, Mat doesn’t get any limelight, and his escapades could have been entirely removed from the book – that’s how little importance they have in the wider scheme of things.

In terms of the writing in general, it is normally spot on and ‘feels’ like Jordan writing, especially in the minor tension-building scenes. Sanderson gets almost all of the characters down pat, especially Egwene, Rand, Siuan Sanche, Cadsuane, and Perrin.

However, there are several problem areas in the book that Sanderson fails with. The first is the Mat sections. But I was also disturbed by how downplayed several of the major, major plot resolutions are that fans have literally been waiting decades for.

Without going into the details, I was shocked at how quickly ongoing mysteries such as Verin Sedai’s secret were solved and then written out of the plot. These things should have been more major focuses of the book. They needed to have more drama and more build-up. People have been constructing theories about these mysteries for the past ten years online. One chapter to deliver the solution is just not enough, when Jordan himself had been feeding the debate for years and years. Especially when many nuggety chapters like this are surrounded by fluffy almost-filler.

In a similar vein, although the climactic battles and confrontations of the book are ultimately satisfying and give you a certain thrill, they are broadly too short and Sanderson didn’t go into enough detail when describing them. These things are BIG events. They should have been treated as such. They shouldn’t be over within several chapters. The repercussions should have been felt.

Ultimately, these are minor quibbles, of the level that you could level at any of the previous Jordan-penned books in The Wheel of Time. And there is no doubt that many (including myself) will consider The Gathering Storm a cut above the most recent few books in the series, where Jordan simply seemed to get bogged down with the size of the world he had created, struggling to bring it all together for the big conclusion.

The one question fans have been debating (OK, to be honest, they’re all still debating who killed bloody Asmodean) over the past few years is whether Brandon Sanderson would be up to the task of finishing Robert Jordan’s masterpiece in a way that is true to the author’s vision.

That answer is yes. If you are a Wheel of Time fan and have not already bought it (what, are you insane?!), run, do not walk, run out to your local bookstore and buy a copy of this book, read it, re-read the entire series, then watch and wait feverishly over the next few months for even a small tidbit of news about when the remaining two books in the series will come out and we finally enter Tarmon Gaidon.

The Last Battle is drawing near, The Wheel of Time is back on track for completion, and things are well in the world again. Let the Dragon ride again on the winds of time.