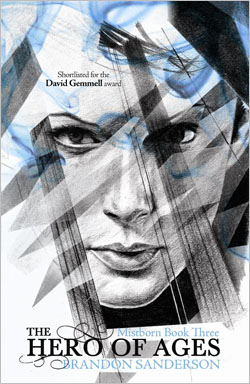 review Wow, what an amazing ride! Hold on tight in the final book of Brandon Sanderson’s stellar Mistborn trilogy … there are so many revelations and dramatic events coming thick and fast that you’ll be keeping your eyes glued to its pages. I couldn’t stop reading and literally stayed up past 1AM in the morning on several succeeding nights to finish it.

The Hero of Ages is the best possible conclusion to what has become one of modern fantasy’s best trilogies. Looking back over Keeping the Door’s reviews of the previous two books, it’s clear that I enjoyed reading the first two books greatly. They were highly satisfying to read and contained a very good mix of character development, action and revelations in the magic system and world history.

At the conclusion of The Well of Ascension (book two in the series), Vin inadvertently released upon the world one of the primal beings behind everything. And it’s not a benevolent force, as long-time readers of fantasy might have guessed.

Dubbed ‘Ruin’, the basic reason for the entity’s existence is to destroy things. Ultimately, if it had it’s way, everything.

It’s not hard to understand, when you start reading The Hero of Ages, that Ruin is not too far away from getting its way. The mists so prevalent in the first two books have started killing people again, earthquakes are leveling buildings all over the place, and ash is falling from the sky in increasing quantities, even piling up to people’s waists in some places.

Vin and her husband, the now emperor Elend, have a lot of allies on their side. The Terrisman Sazed, keeper of the world’s knowledge. Various allomancers with powerful skills. And perhaps most importantly, armies. With most of the empire now under Elend, he has necessarily to focus on how best to use his sheer manpower.

But as events gain pace throughout the book, it’s not clear whether it’ll be enough to keep The Final Empire running.

What I really found amazing about The Hero of Ages is that the book’s constant revelations about the real nature of events in the Final Empire over the past thousand years make clear just how much planning Brandon Sanderson put into this remarkable series.

It’s no exaggeration to say that even very small details from the opening pages of the first book, The Final Empire, are mentioned and finally put into their worthwhile context in the last pages of the final book. I was left stunned at times as I realised the subterfuge that the author had been undertaking in order to slowly reveal, like an onion, layers upon layers of his world.

The genius of Brandon Sanderson’s work is that even though I now know the full context of the first two books in the Mistborn series, when I was reading them, I didn’t feel as though I lacked context. The series has just gradually deepened throughout its length, without losing any of its dramatic tension or sacrificing its action-packed scenes.

After reading the final Mistborn book, it’s easy to see why Robert Jordan’s widow Harriet McDougal was keen for Sanderson to finish Jordan’s epic The Wheel of Time series following his untimely death. Sanderson’s world-building and revelation skills are similar in style to those of Jordan himself.

Finishing the Mistborn trilogy is like finishing Battlestar Galactica, for those who have watched the landmark sci-fi TV series. You awaken slowly from a dream, unsure as to where you really are or what just happened, but knowing that you’re in a place far, far distant from where you began, and stunned by the remarkable journey.