Home Fantasy The Way of Kings by Brandon Sanderson: Review 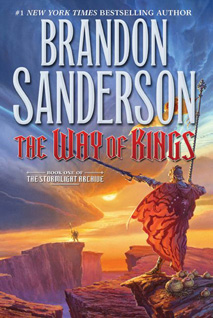 review The Way of Kings is the first book in an ambitious new ten-book fantasy series, The Stormlight Archive, by established fantasy novelist Brandon Sanderson. And what an opener this is.

Anyone who has even a cursory interest in fantasy literature can’t have missed Sanderson’s entrance into the scene over the past half-decade. After breaking into the scene with the stand-alone novel Elantris in 2005, Sanderson went on to publish the three-book Mistborn series.

I wrote of that series after finishing it that it was one of modern fantasy’s best trilogies. And I felt at the time that it highlighted one of Sanderson’s strongest traits as a writer: His ability to plan. When you finish the final Mistborn book, you walk away stunned that Sanderson had referred to and explained events right in the first pages of the first book in the series in the closing chapter of the third.

It is also this ability to plan that Sanderson has brought to his other major fantasy initiative to date: Finishing Robert Jordan’s epic fantasy series, The Wheel of Time, following the author’s untimely death prior to its conclusion.

It’s hard to imagine a more sprawling and complex fantasy series than the Wheel of Time – or a more accessible one. Fantasy fans commonly compare reading the series to being addicted to crack cocaine. But as I wrote in my review of Sanderson’s first step in completing the series, The Gathering Storm, Sanderson’s planning and writing skills are up to the task of giving fans a satisfactory closure to Jordan’s masterpiece.

I mention all of this to help a reader to understand what they are picking up when they buy The Way of Kings.

This book is nothing less than Sanderson’s first step in attempting to equal Jordan’s masterpiece The Wheel of Time. With The Stormlight Archive, Sanderson is taking his first, masterly step into a journey that will likely take him more than a decade to complete and will see his name listed alongside Jordan, Tolkien, George R. R. Martin and Robin Hobb in the pantheon of fantasy greats.

Yes, this book is that good.

In The Way of Kings, Sanderson is taking the planning and writing skills he polished through the Mistborn and Wheel of Time series and applying them to a stunning new and massive canvas.

The first is a mysterious young warrior named Kaladin, who gave up a promising career as a surgeon to join the military in search of honour and glory. But his vision does not come to pass, and he passes into slavery, fighting every day for the right to survive.

The second is a man on the opposite end of life’s scales. Dalinar Kholin is a ‘brightlord’ – one of the rulers of the kingdom of Alethkar, and the commander of a brother army to the one in which Kaladin finds himself enslaved.

The third main character is Shallan, a young woman with remarkable drawing skills who successfully apprentices herself to one of the most renowned scholars of the land. But although she does truly enjoy her studies, Shallan has another underlying motive in mind for getting close to this scholar – one on which the fate of her family rests.

The world in which the stories of these three – and many, many other characters – take place, is a complex one. It is a world in which magic abounds, but as in Mistborn, it is magic that has more than a hint of the technological about it. Magic that has rules and systems governing its operation.

Sanderson’s world is also one in which – as in Mistborn – the past is enshrouded in mystery. Nobody is quite sure what or who the mysterious Knights Radiant were, but their relics – magic swords and armour – continue to be used by modern day people. And rumours of a faceless evil banished in the past continue to haunt and inform the present.

Storms shake the land, and there are daily reminders in The Way of Kings that the world it describes is not Earth. There are tiny magical beings everywhere – dubbed ‘Spren’, arising whenever certain emotions or energies are felt. Gloryspren, for example, manifest as golden lines springing up around someone who has just won a great battle. And Windspren flow around with the wind and play tricks on people.

If it seems already as if there are more than a few shadows of the ideas that Sanderson explored in Mistborn present in The Way of Kings, that’s because there definitely are.

Sanderson’s new series shares much structurally with his old one. The author loves mysteries, and at the heart of his storytelling ability is his habit of gradually revealing the meaning behind tiny details in his world. The experienced fantasy reader can pick up the hints he leaves littered throughout his work as to the true nature of everything in his world – and look forward to the inevitable stunning revelations Sanderson doles out like clockwork.

The magic system in The Way of Kings is similar to that of Mistborn, as is the combat. The mysterious past shaped by clataclysmic events, the true nature of which is not yet apparent, is also similar.

And yet all of these ideas are enhanced and magnified for the bigger stage of The Stormlight Archive. They are grander, and fill the heart and the head more than they did in the limited world of Mistborn.

Sanderson’s greatest problem, it is already apparent, will be the same one that Jordan experienced in The Wheel of Time. Sanderson will need to set boundaries around his world-building power, so that when he gets to book five or six of his mammoth series, his plot doesn’t become bogged down with the need to resolve dozens – nay, hundreds, in the Wheel of Time – of complex plot threads.

But we won’t need to worry about this for a while yet.

If there are criticisms of Sanderson’s work, they may be that The Way of Kings could be tighter. The book does seem to repeat some scenes that do not add much in the way of plot or character development; this is a problem for all three of Sanderson’s major characters.

There is also a sense that The Way of Kings is definitely an introductory volume in The Stormlight Archive series. Sanderson kicks off the book with a fast-paced action scene that introduces the reader to the fantastic magic system in his new world; but then spends most of the rest of the book avoiding such awesome displays of action and power.

And yet, it’s hard to criticize the author for doing so. Sanderson rightly needed to leave much to the future so that he could let the sense of anticipation grow throughout this first book and also through his series – he had to hold things back so that he could reveal them later on.

The best way to describe Sanderson’s work for a fantasy reader is to say that it is tremendously satisfying to read. You know what you’re in for and you feel comfortable resting in the hands of an absolute master.

By the time The Way of Kings is complete, much has been revealed about the world in which it takes place, and about its key characters. And yet, it is apparent that the book has only begun to sketch the outlines of a very complex and beautiful picture which will only be complete more than a decade hence.

I read The Way of Kings in a week – staying up late to do so. At almost exactly 1,000 pages it’s a massive tome – and yet I had to devour it all. After that week, however, I am now terribly conscious that I must wait another year, 18 months, or even more (panic!) for the next book to come out.

With some reviews of fantasy books, it is clear that the author has certain strengths that will appeal to certain readers but not others, so a critic such as myself can offer only a partial recommendation – or, more rarely, no recommendation at all.

With The Way of Kings this is not so. The Stormlight Archive is a series that, like Robert Jordan’s The Wheel of Time, George R. R. Martin’s A Song of Ice and Fire and Robin Hobb’s Realm of the Elderlings epics, every fantasy fan worth their salt must read and be familiar with. This will be one of the giant series that will help shape the entire scene. Take a week off work now and go and buy The Way of Kings. You won’t regret it.