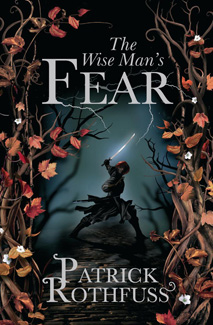 review With The Wise Man’s Fear, relative newcomer author Patrick Rothfuss has produced what his fans have been praying for ever since the 2007 release of the first book in his series The Kingkiller Chronicle: a sequel worthy in every way in which we might judge it.

The 2007 release of the first book in the series, The Name of the Wind, was a triumph for Rothfuss. The lengthy novel, which had many years of genesis, instantly became a critically acclaimed hit upon release and vaulted the author from obscurity in a university teaching position onto the world literature stage, as well as achieving him financial success.

The release of The Wise Man’s Fear will only magnify that success.

Rothfuss’ follow-up effort is an intensely meaty book. It is packed full of both of those essential elements to any modern story – plot and character development. In addition, with its release Rothfuss proves himself a master at those arts specific to the fantasy genre – the slow-burning nature of long fantasy series, as well as the gradual revelation of the mysterious nature of magic and the half familiar, half alien world around the protagonist that fantasy worlds constitute.

The reader gets their hands on the details of so many of the story elements that were hinted at in the first book, in a way that is intensely satisfying. Its protagonist, Kvothe, starts to master some of the power which he manifested during The Name of the Wind, and there are some truly thrilling scenes in The Wise Man’s Fear when this happens. His life also starts to gain a degree of stability. This is exactly the sort of thing you want from the second book in a major trilogy.

However, new elements are introduced into the story, and while progress is made on its greater mysteries, there is clearly so much more to come – and likely much that Rothfuss plans never to completely explain to the reader, so that mystery will remain even after the third book in the series is published.

Then, too, there are twists in The Wise Man’s Fear. The development of plot and character takes place in ways which you both do and don’t expect; and at times I felt when reading it that Rothfuss was playing a gentle game of sleight with the reader – sleight because of the degree of deception which is involved – but gentle because it’s a game which both the author and the reader will relish.

As with The Name of the Wind, The Wise Man’s Fear kicks off in the inn of Kvothe, its major character. Kvothe – his civilisation’s most notorious magic-worker and trouble-maker, is still telling the story of his life so that his would-be biographer, Chronicler, will be able to get it down on paper.

That story takes readers back to the University where Kvothe is studying magic, and once again we are plunged into his chaotic life – his financial struggles, his difficulties with other students and his growing understanding of various aspects of the mystic and mundane arts – including his developing musical talent.

Yet this time the game of life is played a little more powerfully by Kvothe, with his growing personal resources.

Traditionally the practitioner of any craft or art goes through three stages in learning it. Firstly they struggle as an apprentice, then find their feet as a journeyman, and finally – they become a master.

The Wise Man’s Fear is Kvothe’s journeyman story. He knows many basics. His life has evolved past the lowest levels of survival. And yet all this means is that the challenges, rivals and opportunities he faces are higher still.

Many of the same characters from The Name of the Wind are also present, but like Kvothe, they do not remain static picture postcards, nor are they around simply to be plot elements. Powerful personalities such as Ambrose, Elodin, Devi and more develop both independently and within Kvothe’s understanding of them, and in a way which is appropriate, given the book’s plot.

And of course Kvothe’s love interest Denna remains in the picture … and their relationship is just as fascinating and at times tortured as you would expect it to be.

Without wanting to wax too lyrical about it, all of this adds up to a book which anyone who describes themselves as a fantasy fan must pick up immediately – and, given the late timing of this review, likely already has. The Kingkiller Chronicle is every bit as amazing as its major rivals – A Song of Ice and Fire, The Wheel of Time and even The Lord of the Rings – but it is a tighter, more personal story, and a great deal more tortured. And those whose personalities lead them to enjoy the darker sides of human emotions and the striving of heroes plagued with them will likely enjoy Rothfuss’ efforts more than those of his progenitors.

I would most directly compare The Kingkiller Chronicle to Robin Hobb’s masterly Assassin’s series. A similar tortured hero awaits readers; a hero of limited means but great latent abilities. But Kvothe’s tale is made ever more potent by the reader’s awareness that he is not personally an innocent; sometimes his flawed personality leads him to make the wrong choices; unlike FitzChivalry Farseer, few would classify Kvothe as particularly noble.

There are, of course, flaws in the book.

Rothfuss’ unwillingness to tell certain large narrative threads such as Kvothe’s trial are simply skipped; with the reader being disconcertingly jumped ahead in the protagonists’ timeline to maintain the pace of the tale. Then too, once or twice too often Rothfuss lets minor story arcs drag out too long; at times the reader longs for the plot to return to a somewhat more normal setting so that certain mysterious elements of Kvothe’s world don’t lose their potency.

Many of the same themes from the first book, particularly during Kvothe’s time at the University, are re-hashed and could have been trimmed down.

And course, there is the problem of the wider story.

Clearly, Kvothe’s story has not yet ended, as he is still alive to tell it; in The Wise Man’s Fear the boundary between current and past events has started to fray. Frankly, I have no idea how Rothfuss plans to resolve the fact that by the end of the third and last book in the series, he will be up to date with current events in Kvothe’s world; current events which he will also need to address.

Given that The Kingkiller Chronicle is very much a coming of age tale, it seems clear that it will lose its potency if Rothfuss decides to create second series based around Kvothe’s life but focused on events following its conclusion. Yet one can feel Rothfuss in The Wise Man’s Fear already looking for the next story.

One way to get around this would be for the next series to also take place in Kvothe’s world and deal with current events – but from a different character’s perspective, with Kvothe being an active character in that world but not the protagonist. This will test Rothfuss’ writing skill. Unlike several of his contemporaries – Brandon Sanderson, for one – Rothfuss has not yet demonstrated an ability to steadfastly write the stories of other characters than Kvothe. It will be interesting to see what his plans after The Kingkiller Chronicle are.

And there will be plans. After all, Rothfuss is also a young man who has just come into his power ☺

All in all, if you read The Name of the Wind, I have no doubt you will read, if you haven’t already, The Wise Man’s Fear. The Kingkiller Chronicle is one of the best, if not the best, fantasy series of this decade. It’s a masterpiece – and I commend it to you.