Home Fantasy The Slow Regard of Silent Things by Patrick Rothfuss: Review 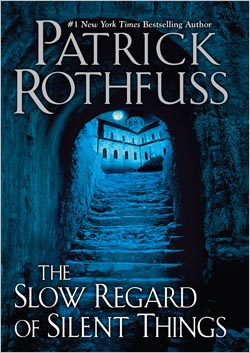 review Patrick Rothfuss’s novella The Slow Regard of Silent Things isn’t the next world-shaking novel in the author’s acclaimed series The Kingkiller Chronicle. But it’s an extremely charming extended vignette in that world that any Rothfuss fan would be a true fool to miss.

In 2007, then-unknown author Patrick Rothfuss burst onto the international fantasy scene with his debut effort, the mammoth novel The Name of the Wind. The book and its 2011 successor, The Wise Man’s Fear, are now considered some of the best fantasy works ever published, and many, many fantasy fans are waiting impatiently for Rothfuss to finish the three book series with a novel currently titled The Doors of Stone.

The Slow Regard of Silent Things is not a complete novel set in the universe of The Kingkiller Chronicle. It does not feature Rothfuss’ tortured protagonist Kvothe, although Kvothe’s shadow can be found throughout the book. And it’s not a long book — clocking in at only 176 pages, compared with 722 for The Name of the Wind and a huge 1,120 for The Wise Man’s Fear.

However, the book is still set in the world of The Kingkiller Chronicle. It focuses on several days in the life of Auri, a mysterious girl who lives in the Underthing — the tunnels, passages and rooms which lie underneath the University in which many of Kvothe’s exploits take place. Auri is a character known to Kvothe — and very few others in the University — even if she doesn’t get a whole look of screentime in the two large Kingkiller Chronicle novels.

What we get with The Slow Regard of Silent Things, then, is not a window onto the main story of The Kingkiller Chronicle, but a window into the life of one of its mysterious side characters — her personality, her habits, her daily life, and the world of the Underthing, which in itself is a very interesting place.

And the whole thing is completely and totally charming.

The Kingkiller Chronicle is a very serious set of novels. It’s dense, deep, emotional, tortured and at times, harrowing. You can feel the vibrations of this world in The Slow Regard of Silent Things. But they’re out of sight and around the corner. Auri’s world is not a world of seriousness, but one of serious play, if you know what the difference is.

The elf-like girl delights in many things which children would. And she takes a delightful joy in everything around her. Ordinary items gain a kind of magic in her eyes and elements of personality, and rooms, passages, staircases and gain names and become enchanted zones full of wonder.

An adult in the world of the Kingkiller Chronicle, viewing Auri’s activities finding objects, moving them and placing them in certain places, would probably view her activities as frivolous. But in Auri’s eyes her work is deadly serious — an activity aimed at bringing order and happiness to the world around her — and is intermingled with the idea of play.

In Ursula Le Guin’s science fiction masterpiece The Dispossessed, the residents of the anarchist moon Anarres use the same word for work and play, seeing them as the same concept. People take delight in their work and working hard is synonomous with playing. The same idea might be said to apply to Auri’s work.

And as we are talking about a fantasy world here, there are also tantalising hints that underlying Auri’s activities is a deeper and perhaps magical meaning, possibly tied to Kvothe’s own journey …

The Slow Regard of Silent Things, as Rothfuss writes in his postscript to the novella, has had a somewhat troubled past and has been through a few different versions. You get the sense that Rothfuss almost wants to apologise to fans for producing this unorthodox tale instead of the long-awaited final novel in The Kingkiller Chronicle.

However, the author also acknowledges that as he started telling this story, he couldn’t stop and just kept on going. It drew him in and he followed its threads.

This explanation reflects what happens when an authentic storyteller follows their instincts, and it’s no surprise that The Slow Regard of Silent Things has ended up as charming and perfect a little story as it is. I loved reading about Auri’s world, and now I am quite entranced by her daily life. I want to know more. I want Auri to be featured more in The Kingkiller Chronicle, and I hope Rothfuss gives her some space in his bigger books so we can start to suspect what the conclusion to her own story might look like.

The Slow Regard of Silent Things is not Patrick Rothfuss’s next masterpiece. But make no mistake: If you read The Name of the Wind and The Wise Man’s Fear, you had better bloody read The Slow Regard of Silent Things as well. There is a master at work here, and this is another piece of the epic puzzle which he is gradually laying out before us. The book is a must-read for fantasy fans of any persuasion, and a timeless and charming classic.