Home Fantasy Gardens of the Moon by Steven Erikson: Review 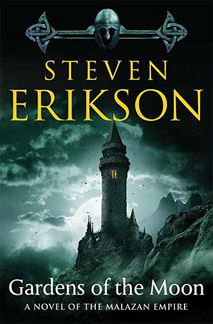 review In fantasy book fandom, few authors have a reputation amongst hardcore fans as fearsome as the one that rests upon the shoulders of Steven Erikson, co-author of the Malazan Book of the Fallen series.

The Canadian writer, whose real name is Steve Rune Lundin, wields some fearsome credentials. He originally trained as both an archaeologist and anthropologist, and he brings these skills to his novel-writing. His books are billed simultaneously as some of the most challenging and gritty works of fantasy fiction available, but also some of the best, once fans get past the initial reading barriers.

It’s common for fantasy fans to recommend Erikson’s work to each other upon learning that a fellow fan has recently finished reading all of another major author’s work – say, Robert Jordan, George R. R. Martin, Robin Hobb or Janny Wurts.

The assumption is that having made it through a more accessible author, the fan who is the target of the recommendation has now “graduated” to a level where they can read Erikson.

The question that this review will attempt to answer is whether or not Erikson’s reputation is deserved. It’s an appropriate time to examine the topic – Gardens of the Moon, the first book in the Malazan series – recently celebrated the tenth anniversary of its publication – and the last book in the series planned by Erikson – his fellow author Ian Cameron Esslemont also writes in the Malazan world – is on its way.

And just yesterday I finished reading Gardens of the Moon for the first time. So, on with the review.

There is no doubt that Gardens of the Moon is in many ways a challenging book, and readers weaned on the ‘easy reading’ styles of Robert Jordan or Robin Hobb will find it difficult to get past the first few chapters. Erikson consciously avoided many fantasy plot, character and thematic stereotypes when building Gardens of the Moon, and this lends the book a level of difficulty which many will find offputting.

I personally have put Gardens of the Moon down several times over the past few years after reading the first several hundred pages.

And yet, like so many ‘difficult’ books, once the more advanced reader pushes past Gardens’ first few chapters and becomes more comfortable with what Erikson is trying to achieve, it becomes obvious that something rather remarkable and, to be honest, bloody awesome is going on. This is book that enjoys playing with the fantasy tropes that readers have come to expect – in a hilarious, sophisticated and overwhelmingly positive way.

The plot of Gardens of the Moon is complex. The book’s story takes place on a fantasy world where the massive Malazan empire is gradually annexing the territory around it.

War is everywhere, and the Malazans are bringing it to everyone, particularly the free city of Darujhistan, where much of the book is set.

Erikson situates a number of interesting characters in this war-torn world. Sergeant Whiskeyjack and his squad (which includes soldiers, an assassin, a wizard, some explosives experts and more) are part of the legendary Bridgeburners, a section of the armies of the Malazan Empire. Tattersail is a very powerful wizard whose company of mages (also part of the same armies) is virtually wiped out in the first pages of the book.

Then there is an evil puppet, once a sorcerer, a handful of capricious gods and almost-gods (including incarnations of death, chance, and the hounds of hell) who interfere almost constantly in human affairs, a nobleman’s son turned army officer, a thief and a mysterious fat man named Kruppe who seems to be in love with food, wine and all of life’s comforts, an alchemist, an Empress and her tools, and more.

And who could forget Anomander Rake, the dark lord of Moon’s Spawn, a mountain which floats across the continent of Genabackis, defying the Malazan Empire at every turn (see image, left)?

When you put all these characters together, with their different gritty histories and motivations (be they petty or grand), the only way you can really describe what comes out of Erikson’s melting pot is “a great big mess”.

No ends are wrapped up neatly in Gardens of the Moon, and just when you think you know a character, their potential, their history and their relationships, Erikson will toss a coin and inject something different into their lives and into his complex narrative.

But what a glorious mess it is.

Gods and almost-gods playing and being played by mortals. Virgin ladies baring breasts to thieves sneaking into their rooms to steal their gold. A manic puppet fleeing the hounds of hell in the chaos between magic ‘warrens’ that wizards draw their power from.

The overarching plot of Gardens of the Moon might well be summed up as something like “to hell with it, the characters said. Let’s just go ahead and see what happens”.

Gardens of the Moon is complete, sprawling, glorious, hilarious chaos.

Having said all that, there are several glaring problems with the book, which I attribute to Erikson’s relative youth as a writer when Gardens of the Moon was put together (he has stated publicly, if I recall correctly, that it was the most difficult book for him to write, and he learned a lot from the process).

For starters, most of the characters in the book are fairly thinly sketched out, and suffer from quite unrealistic motivations that make the plot somewhat unrealistic.

Why Whiskeyjack and the Bridgeburners, for example, don’t simply desert the Malazan Empire’s army … I don’t know. What several gods like Oponn are really trying to achieve … isn’t made clear. The same could be said for Captain Ganoes Paran, the mage Tattersail, Toc the Younger, and more.

Frankly, Erikson threw too many characters in Gardens of the Moon for many of them to have the sort of development that they really need, with the possible exception of Kruppe – whose mysterious nature just intrigues me beyond belief.

This problem of character development means the plot suffers at times in terms of believability. And there are other problems with that aspect of the book as well … Erikson overuses the classic way that many fantasy authors escape thorny plot construction problems. Just use a fairly unexplained magic system to overcome any difficult circumstance!

At far too many times in Gardens of the Moon, just as something difficult has to be resolved in the plot, Erikson throws in a powerful magic effect to bring things back on track.

It’s a cheap stunt, and fantasy authors in general have a lot to learn from series like Mistborn. Magic systems must be limited and work according to rules (even if the reader doesn’t know all the rules) to retain reader belief in them. Otherwise the plot structure sometimes becomes unbelievable because elements in it are not bound by rules.

The final problem with the book is perhaps that Erikson leaves his readers hanging in so many areas. Yes, we do achieve plot closure with many characters … but there are just so many secrets and understandings about the world Erikson has created that he doesn’t do anything to wrap up by the end of Gardens of the Moon. I can only hope and pray that some of the mysteries unveiled in Gardens of the Moon are explained in the other books in the series.

All in all, Gardens of the Moon is a remarkable book and a must-read for the more advanced fantasy fans amongst us. Ten years ago, its publication heralded the birth of a fantastic new epic series in the Malazan Book of the Fallen.

But it’s a flawed novel. It’s not a masterpiece like Assassin’s Apprentice or The Eye of the World that will appeal to everyone. Instead, it’s an breath-taking experiment in fantasy – perhaps along the same line of power as R. Scott Bakker’s The Darkness That Comes Before, which we’re reading at the moment – that experienced fantasy readers will want to add to their collection and ponder deep into the night.

Erikson deserves his reputation. But there’s a reason that reputation has remained relatively confined to hardcore fantasy fans. If you’re reading this site, you’re likely one of them. So go and buy a dog-eared copy of Gardens of the Moon and enjoy the glorious mess that it is.