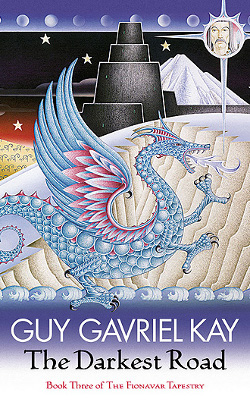 review The Darkest Road represents a satisfying conclusion to Guy Gavriel Kay’s debut fantasy series, The Fionavar Tapestry. All loose ends in the world of Fionavar are tied off neatly, and some dramatic character development and plot threads in the book mean many readers will be hanging on until the final pages. If you enjoyed reading the first book in the trilogy, The Summer Tree, keep on reading until this worthy end.

Note: This review of The Darkest Road, the third book in Guy Gavriel Kay’s trilogy The Fionavar Tapestry, contains spoilers about the first and second books. You probably don’t want to read this review or The Darkest Road itself unless you’ve read The Summer Tree and The Wandering Fire first.

Having said all this, many discerning readers will ultimately feel disappointed with The Darkest Road. On its own merits, it’s a fine read, but the book can’t help but showcase the fact that The Fionavar Tapestry as a whole did not live up to the promise displayed in The Summer Tree.

As we noted in our review of the second book in the series, The Wandering Fire, after The Summer Tree, Kay likely introduced too many characters into his world, making it hard to match the tight focus of the first book.

Both plot focus and character development suffer as a result of this problem. In The Darkest Road, Kay obviously struggles (and arguably fails) to deliver a meaningful narrative about each of the many characters he has created. We catch glimpses of each, but the major characters receive far too little focus as Kay wrestles with what appears to be a self-imposed limit to keep The Fionavar Tapestry to three books.

At the end of the previous book, The Wandering Fire, several major blows were dealt to the forces of the dark god, the Unraveller, Rakoth Maugrim. One of his most powerful lieutenants, the mage Metran, is vanquished and a powerful source of magic used for evil, the Cauldron of Khath Meigol, is destroyed. A powerful sea-beast that was its guardian is also put out of its misery.

Yet the forces of good also lost several of their soldiers. The mage Loren lost his power, one of the original five characters from Earth, Kevin, sacrificed his life to the Goddess Dana to beat back the unnatural Winter, and perhaps most ominously, the legendary knight Lancelot of the Lake has been resurrected, casting doubt on the future of Jennifer (in whose body resides the soul of Queen Guinevere) and her husband Arthur Pendragon.

There is also the random factor in the tapestry … the child of Maugrim’s rape of Jennifer. Not good or evil, Darien must at some stage choose his side in the massive conflict to come.

And so The Darkest Road begins with the forces of good and evil more or less even in power, with a long journey ahead of those under Brennin’s High King Aileron to bring the war to Starkadh, Maugrim’s fortress. In time-honoured fantasy tradition (think Lord of the Rings, The Wheel of Time), The Fionavar Tapestry will end with a climactic battle between the humans and the svart alfar.

And now the criticism.

The main problem with The Darkest Road is that its character development feels rushed. In The Summer Tree, Kay showed us the fascinating clay from which he moulded his characters. A hint of rebelliousness and father trouble here and there, anguish over the untimely death of a loved one at one’s own hands (if ultimately accidental) and so on.

However Kay didn’t really do much to advance the admittedly well-shaped raw outlines of his initial characters in The Wandering Fire, and he doesn’t do enough in The Darkest Road.

The central conceit of a series such as The Fionavar Tapestry is that it allows us to view a fantastic world very different from our own through the eyes of characters from our own world who are transported away from Earth.

However I feel Kay lost sight of this idea in the latter stages of The Fionavar Tapestry. In The Darkest Road the characters from earth are very much acclimatised to Fionavar – alien though it seemed in The Summer Tree. Gods, monsters, transforming wolves … it’s just par for the course for our heroes.

Instead Kay spends much of The Darkest Road focusing on a trio of characters who weren’t even really in The Summer Tree; Guinevere, Lancelot and Arthur Pendragon.

You can make an argument that Jennifer/Guinevere was of course one of the original characters from Earth … but like Lancelot and Arthur, in The Darkest Road she is very much a cardboard cut-out character … infinitely wise, beautiful, sad, tragic … but not really human. More like an ideal of a woman than a real one.

Yes, we see a lot of Kim and Paul grappling with the gifts that Fionavar has given (dealt?) them. But we don’t see anything near the level of emotion that we saw in The Summer Tree when Paul hung himself on the tree of Mornir. And really, in a triumphal end of series book, these guys should have advanced a bit more than being angsty because they can’t precisely control their world-shaking power. Just a little.

Other characters are also skipped over … Darien particularly had the potential to become something quite unique in the Fionavar universe, but his character is never really explored beyond basic adolescent emotions.

Perhaps the greatest tragedy of The Darkest Road is that we still don’t know much about Rakoth Maugrim. He’s a mysterious, dark lord who seems so, for want of a better word, faceless. What is he really afraid of? Is he just an elemental force? Why is he so twisted? Not much about him is explained.

One of the main problems with The Darkest Road’s plot is that it is all just too easy. In The Summer Tree, Paul hung on a tree for three days and came to the bring of death. Since that time, he just seems to be able to pull some Mornir goodness out of his ass whenever he’s in a pickle and “hey presto”, with the magic words, all the badness disappears. It’s not quite as bad with Kim, but it’s close.

No sooner does Maugrim pull out his biggest, badass lieutenant, than the forces of light take him down in a heroic scene. No sooner does he unleash his ultimate weapon that he’s been hoarding for a hundred years, than it gets taken down like a fluffy kitten.

I guess I wanted to see the forces of light go through a bit more in this The Darkest Road. I guess I wanted things to get well … dark. Frodo on Mount Doom dark. Brandon Sanderson’s The Hero of Ages knee-deep in ashes dark. Instead we got pixie-dust and fairies and romance.

The Fionavar Tapestry kicked off with a bang and could have gone on to be one of the greatest fantasy series of all time. Instead, The Darkest Road makes it clear that it reached ever so close to the top tier, grazed its fingers, but fell short. Its last book is still a must-read for fantasy fans, and will remain a classic of the genre. But it’s not a masterwork.