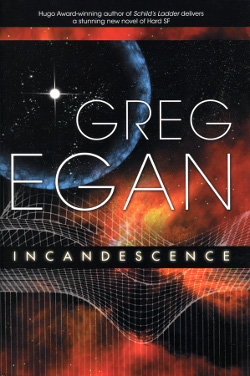 Greg Egan is one of Australia’s top science fiction authors, with seven novels and a slew of collections and short stories under his belt. His 1998 novella Oceanic won the 1999 Hugo Award for Best Novella.

Egan’s work is usually referred to as “hard” sci-fi, which is a sub-section of the genre which often focuses on scientific accuracy or detail. It’s easy to understand why the author can bring this approach to his writing when you realise that he holds a Mathematics degree from the University of Western Australia and has a second career as a software developer.

However, as the best sci-fi authors do, he also has a focus on showing the implications for humans of the technology that he writes about. His books are available widely, and watch out for his next novel Zendegi, which is due out in mid-2010.

When doing research about Egan we also found several other interviews going back quite a ways; one with Piffle, with Eidolon, and a short one about Incandescence.

There is also a lengthy rant on Tor.com from Jon Evans wondering why Egan isn’t considered a superstar of the genre. The easy answer is that many people do consider him so :)

From your website it looks like you have two new books upcoming: Zendegi and Orthogonal. What can you let slip about their current status and subject matter?

Zendegi is set in Iran in the very near future; the first part of the novel takes place in 2012. The ultimate focus of the story involves brain mapping and virtual reality, but the backgrounds of all the characters are entwined with the Iranian pro-democracy movement in various ways. It’s due to be published in mid-2010.

Orthogonal is a novel I’m working on right now; it’s set in a universe with laws of physics that are different from our own. One small change in a fundamental equation — just turning a minus sign into a plus sign — leads to some incredibly rich variations in everything from the way biology works to the relativistic effects of space travel.

Do you have any other writing projects on the boil?

No, Orthogonal is taking up all of my time right now.

There was a fairly large gap between your 2002 book Schild’s Ladder and 2008’s Incandescence. Why so large a gap between books?

In 2002, I got involved with the refugee support movement, trying to help some of the asylum seekers who were in long-term detention in Australia. It really was a disgraceful situation; many people were locked up for three or four years, and some for as long as seven. That ended up monopolising my attention for about four years, so I didn’t get much writing done.

And though the current Australian government has been much better than the last one, in recent weeks the whole issue has been turned into an hysterical, politicised mess once more.

We love the notice on your website about photographs of you. In addition, you’ve been described as a famously reclusive author. What’s the background to your approach there?

Photographs of your friends and family mean something to you, because they remind you of people you’ve interacted with face-to-face for years. A photograph of someone like an author, even if you happen to like their books, is utterly meaningless. Actually, the bizarre situation which the note on my web page addresses — the fact that some idiots have been stealing photos from the web sites of other people called “Greg Egan”, and putting them on SF sites as photos of me — only proves the point.

At one stage, about two dozen SF sites had a picture of the same professor of engineering from Monash University that they were representing as a photo of me. But apart from being incredibly rude to this man whose photo they’d stolen, what difference did it make to any reader that this picture wasn’t actually me? None at all.

As for being “reclusive”, that’s pretty funny; I spend my time with people whose company I enjoy. If there are authors who genuinely enjoy spending their long weekends at SF conventions, that’s fine, but I’d be bored out of my skull.

Your work is often described as “hard” science fiction, in that it is characterised by an emphasis on scientific accuracy. And yet it often also focuses on what might be termed an exploration of how technology has the potential to change what it means to be human (a classic sci-fi trope). Is there a tension between the two ideas, and if so, how do you negotiate it?

I’m interested in science as a subject in its own right, just as much as I’m interested in the effects of technology on the human condition. In many things I write the two will be combined, but even then it’s important to try to describe the science accurately. In a novel such as Incandescence, though, the entire point is understanding the science, and it really doesn’t bother me in the least that it’s not an exploration of the human condition.

There are times when it’s worth putting aside the endless myopic navel-gazing that occupies so much literature, in order to look out at the universe itself and value it for what it is.

Australian readers such as myself get a little thrill whenever we pick up a local mention in your books; it’s rare that our country features at all in sci-fi/fantasy literature. What’s your opinion of the state of the Australian sci-fi literature scene, and what can be done to boost it?

Writers should just write to the best of their ability; everything else follows from that.

Computer science is advancing rapidly, yet not always in the arenas which earlier sci-fi writers thought it would. In particular, we appear to have quite a few barriers in the area of artificial intelligence. Are you personally disappointed by this, or happy to remain in a world where humans are relatively alone for a little bit longer?

I can’t say I’m disappointed, or surprised, that we don’t have artificial intelligence yet. I’ve written things where conscious software is created in the near future, but it’s usually in the form of direct copies of human minds, so it’s more a matter of us migrating from our bodies than creating a new form of intelligence from scratch.

At the moment we’re so far away from creating any kind of conscious software that it’s hard to know which prospects are realistic, and which are pure fantasy. When we do finally grope our way towards some tangible results, I hope we proceed slowly and carefully, because this has the potential to lead to a lot of suffering.

The present generation of humans emerged out of hundreds of millions of years of animals tearing each other’s throats out, and tens of thousands of years of people being prey to famine and disease. We might aspire to do much better than that, but creating an entirely new kind of intelligence that’s happy with its own place in the world is an incredibly daunting prospect.

What methods do you use to keep up to date on mathematical and scientific theory, and to research it for your writing?

I read a lot of general science, and more specialised journal papers and textbooks in areas that I’m focusing on.

What current technologies most fascinate you when you think about their future potential?

Brain mapping is going to be an immensely interesting and important field. In practical terms, it will lead to all kinds of assistive technology for people with disabilities, and in the longer term it’s going to shed light on the nature of every mental process.

I usually find your books easy to get into right from the first few chapters. But some sections have attracted criticism from reviewers for what has been described as lengthy technical exposition. How would you respond to this criticism?

People with no interest in science are very well catered for in science fiction; 99 percent of SF is written for them. I make no apology for contributing to the 1 percent that treats science as something of interest in its own right.

Lastly, in my household we are also vegetarians. What is your favourite vegetarian meal?